Myths about the Movie 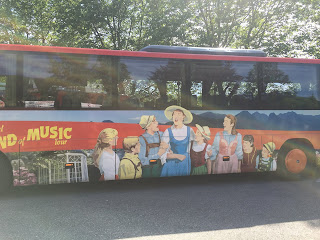 One of the highlights of our recent vacation (for me at least) was joining the Sound of Music bus tour. We learned the facts about the von Trapp family and the reality behind the movie making process. I'll share a few of them with you.

Most of the basic story dealt with real facts. After the death of Captain von Trapp's wife, Maria came to be a governess to his eight children. It was interesting to me that Maria was 25 years younger than Captain. We saw the abbey where she was living before meeting the family but couldn't go inside the structure since it's still a nunnery today. 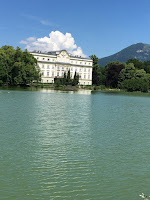 Two different houses were actually used for filming the Captain's house. Today both houses are privately owned so that's as close as we could get. On the right, is the house that was used as the front for the movie. Maria walked along the wall in the picture the first day she went to meet the children. The back of the house was across town on a lake (pictured on the left).

During the movie, Maria and the children fell out of a boat near the back terrace. That wasn't written into the script at all. Gretel, the youngest girl, refused to get back into the boat again because she couldn't swim. She was too terrified to film it a second time, so it stayed in the movie. 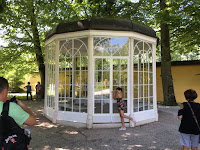 The gazebo was moved from the back of the house to a park because the owners of the house couldn't have tourists coming to see it all the time. In the filming of the movie, Lisl cut herself when she broke one of the windows while dancing. After that, the movie was filmed with a gazebo without glass for protection of the actresses. 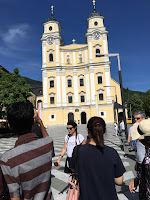 In the movie, Maria and the Captain fell in love and decided to get married. In reality, the children persuaded the adults to get married because they loved both their father and their governess. The match was more a wedding of convenience, at first. 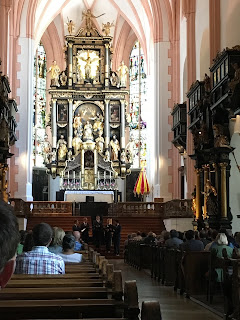 The wedding between Maria and Captain actually took place in the church by the abbey in Salzburg, but it was filmed in a church miles away from the city in a town called Mondsee. The bus took us out to this beautiful town to see the large cathedral.

The inside of the church was a large as I remember from the movie, but I was surprised by the color of the interior - pink. It was a truly beautiful building.

In the movie, the family had to flee from Salzburg shortly after Maria and Captain were married. The real story is that they added two children to the family before they were forced to flee from the Nazis.

The family really did perform at a music competition in Salzburg right before they fled from the Germans. They also had to hide in the cemetery of the abbey to escape being caught. However, the fact that they hiked out of the Alps into freedom is not possible. The picture on the right shows the mountain ranges between the Salzburg area and Italy. There is no way they could have walked over all those high cliffs. Instead, they had a car that took them to the Salzburg train station and escaped by train to Italy. From there they went to England and on to America.

Today the descendants of Maria and Captain live in Vermont where they run a lodge and still sing to entertain guests that stay at the lodge. I've heard that it's a lovely place to visit.

On Our Way Back Home

Our luggage packed to go to Europe  More than four years ago, we packed up all these bags and started our adventure of life in Europe. Some of you may have followed allowed with me by reading these posts over the last four years.  I tried to share with you my experiences of how life is different living in Europe and our adventures in the many countries we've lived in and visited.  We've met so many wonderful people and seen so many amazing and beautiful things during these four years. These will be years that we will always remember and cherish.  View of Prague  It's hard for me to think that we started this adventure with our move to Prague in May 2017. Living without a car and adjusting to the European lifestyle filled our life that year. The beauty of Prague, filled with tourists, was a wonder to me, who hadn't lived in Europe before. Famous Russian Church By June 2018, we were on our way to St. Petersburg, Russia. That meant another adjustment to our lifestyle. My h
Read more