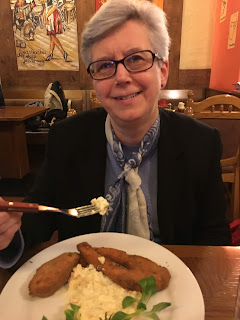 I had the experience of eating a very unique Christmas dinner on Christmas Eve this year. The main course of the meal consisted of potato salad and fried carp, and of course, a glass of beer. Basically, a Friday night fish fry anyone from the upper Midwest would be very familiar with.


As it turns out, this Christmas meal was the same that almost every other Czech citizen ate. This traditional Christmas menu comes from the French Alsace region. Carp has been on dinner tables for this special day since mid-1800s. The recipe has been passed down from mother to daughter since then. I was brave enough to try it in a restaurant on Christmas Eve. 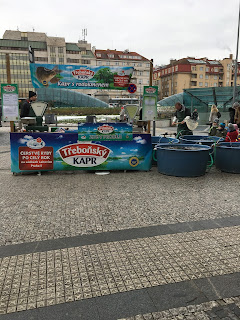 When we first heard of this, we were astounded. Carp? A delicacy saved for Christmas dinner? In the United States, our only remembrance of this freshwater fish was that carp are a nuisance at best. The one fish you'd toss overboard if snagged on a fishing pole. Not so in Czechia.


The most interesting thing we've seen about it was how the carp were purchased. About five days before Christmas, vendors set up their stations at major intersections. The next day the large plastic tubs were filled with water and live fish.

When it got closer to Christmas Eve, people waited in lines, sometimes for hours, to pick out their carp for dinner. The vendor caught and weighed one fish only to be told it was either too big or small, and another one was chosen.


In some cases, the carp were dropped into plastic bags to live a few more days in bathtubs at home. We've read that they do this to cleanse them for two days. Then the father has the job of being the executioner, along with the gutting and cleaning process. 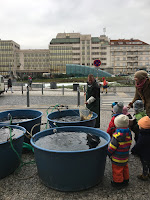 For a bit more money, the vendor would gladly, club the carp to stun it and then cut off its head. Then the gutted carcass, plus the head, was sent home in the plastic bag. This was all done out on a street corner in plain sight of children standing around, or adults taking pictures.

Needless to say, there was blood and guts all over the place. I think it's safe to say that this would never happen in the U.S. There were no inspectors around at all. My husband and I were dumbfounded by the process. 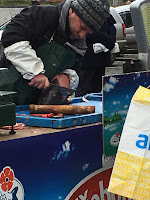 The "massacre", labeled by my husband, ended by the evening of the 23rd. The tubs and cleaning table were packed up into a truck and hauled away. When we returned home at 5:30, the sidewalk had been washed off of any telltale residue and all was normal again.

It was a very unique thing for us to witness for the first time. And, by the way, the resulting meal in the restaurant wasn't anything to write home about. In other words, don't bother planning next year's vacation for a Prague Christmas just to taste carp and potato salad - even if you LOVE Friday night fish fries.