Showing posts from April, 2021
Show all

The Golden Domes of Riga 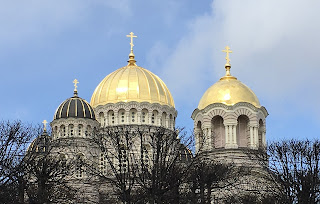 Orthodox Cathedral - Riga  The golden domes of the Nativity of Christ Cathedral stand out above the trees near Old Town Riga. We walk past this large building in the park not far from our apartment.  The domes shine out to the citizens on sunny days. Surrounded by the trees in the park, the walls of the cathedral are not easy to see in summer, but the size is undeniable. Of course, the golden domes tell everyone that this is a Russian Orthodox Church. After living in St. Petersburg, that is easy for us to define with the Russian style architecture. This cathedral was built between 1876 and 1883 when Latvia was a part of the Russian Empire under the reign of Tsar Alexander II.  Main Door This is the largest Orthodox Church in the entire Baltic area. A massive tower rises toward the sky when a visitor approaches the front door.  Entryway painting I visited several orthodox churches during my years in Europe. The thing that they have in common is that the interiors are covered with images
1 comment
Read more 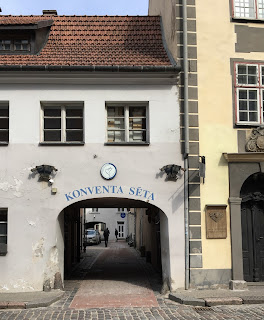 Archway for Convent Courtyard The walk to our most-visited grocery store takes us through the streets of Old Riga. When we first moved here more than a year ago, we always strolled on the the cobble-stoned streets to get there. Then we found a shortcut through the middle of a block. Spotting an arch that was labeled "Konventa Seta," we decided to enter and see where it led. After walking through the archway, we walked into ancient history.  Upon doing some research, I found out that this Convent Courtyard was originally built in the 13th Century as a courtyard to the Order of the Sword's Castle. It has been reconstructed many times since then, but the original walls were built in the 1240s. It was a courtyard that connected St. George's Church with the rest of the original castle.  St. George's Chapel St. George's Church today is the Museum of Decorative Arts and Designs. The outside walls are all that remains of the chapel used by the Knights of the Brother
Post a Comment
Read more 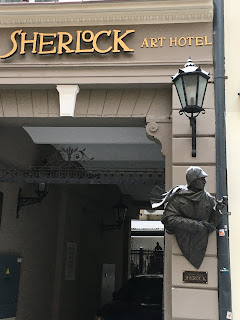 Entrance to hotel If you're an admirer of Sherlock Holmes, famous London detective of the late 19th Century, you'll love the Sherlock Art Hotel in Riga. They have a particular respect for Sir Arthur Conan Doyle, author of the Sherlock Holmes mysteries.  Sherlock himself The hotel, located only a block from the Dom Square, has a bust of the detective himself attached to the outside wall. Anyone who knows Sherlock Holmes will enjoy the pipe in his left hand and gun in his right hand.  Holmes' residence Upon walking through the archway, you are greeted with a life-size painting of the home that Sherlock Holmes lived and worked with Dr. Watson - 221B Baker Street. The Victorian-era painting is so realistic that a car parked in front of it is the only way you know you're in the 21st Century. Painted Mural An 18th Century street mural of horse-drawn carriages and pedestrians greets a visitor in the inner courtyard.  Sherlock on a mission Another picture shows Sherlock at hi
Post a Comment
Read more
More posts