Showing posts from 2019
Show all

BLESSINGS TO YOU THIS CHRISTMAS SEASON FROM OUR HOUSE TO YOURS! Painting "Adoration of the Shepherds" by Gerrit van Honthorst (1622) - public domain.
Post a Comment
Read more 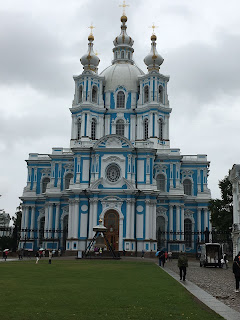 Smolny Cathedral One of the most beautiful cathedrals in St. Petersburg was built for a different purpose than it is used now. Smolny Cathedral, near the banks of the Neva River, was built by Elizabeth, the daughter of Peter the Great, as part of a convent that she was going to live in. When Elizabeth found out that she was disallowed for succession to her father's throne, she decided to build a convent to live out her life with other nuns. However, when her nephew was overthrown in a coup in 1741, she gave up the monastic idea and ascended to the throne as Empress of Russia. Aerial view of Smolny Convent  The large cathedral in the center of the convent wasn't finished until after Elizabeth's death in 1764. The buildings around the cathedral were used to house a girls' school instead of a convent after the Empress no longer needed it for herself. Currently, the buildings are part of the Saint Petersburg State University. During Soviet rule, the cat
Post a Comment
Read more 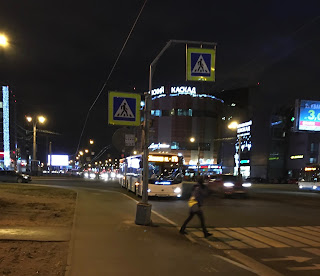 I have to share my day with you to explain my topic this week. I had a meeting this morning at 9:30, so I was part of the morning rush hour here. First of all, I think that most people start work about 9:30 or 10:00 in Russia. That's when the metros and buses are the most crowded. There's no early morning for most workers - I don't think. Anyway, I was part of the morning commute and left the house at 8:15. That's late by US standards, but this morning it was still as dark as 2 AM - as you can see by the photo on the left. There were people scurrying on the sidewalks toward the metro station or toward their offices after riding the metro, so it was a normal commuting morning. The bus stop had the usual commuters also waiting for their bus, but total darkness. I waited at the stop until the arrival of my bus at 8:30 - still total darkness. After a thirty minute ride (9:00), I exited the bus to find that a hint of light was appearing in the sky. I knew that the
Post a Comment
Read more

St. Petersburg Opera Theater Now that I know I won't be living here much longer, I thought I'd better experience as much of Russia as possible. That's why I attended a Russian opera with my Russian talk group a couple weeks ago. I'm not a huge opera fan, but it was well worth going just to see the building in which it was located. From the outside, it looks pretty much like 75% of all the buildings in our city. The theater has been located in the mansion of Baron von Derviz since 1998. Even thought it wasn't very large, the opera hall itself was very ornate with gold and sculptures lining the walls. It gave the audience the feeling of high society. I tried to imagine what this room might have been when the building was the residence of the Baron. Wide staircases and hallways added to the feeing of high Russian society, like so many of the other mansions I've visited in this historic city. It was beautiful to see. But the most unique room met
Post a Comment
Read more 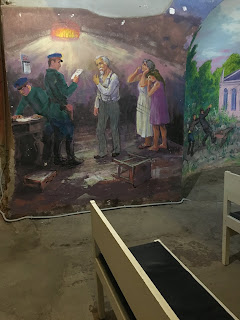 The pictures below were painted in the basement of St. Peter's Lutheran Church in St. Petersburg, Russia after the church was restored to the congregation. It shares the basement space with the cement swimming pool that was in last week's post. The pictures tell the history of Lutherans under the Soviet control. I'll repeat the story behind the pictures. People were brought before government officials and questioned about their faith.  The churches were seized and desecrated by the steeple torn down or other atrocities. Children were taught that religions were bad and should not be listened to. Men were seized and forced to go on transportation trains east to Siberia.  During the cold winter days in Siberia, the prisoners were forced to cut trees and work in the woods for the government. T he exiles were kept in a Soviet gulag - a forced labor camp - behind a fence because they were prisoners. With all the men shipped
Post a Comment
Read more 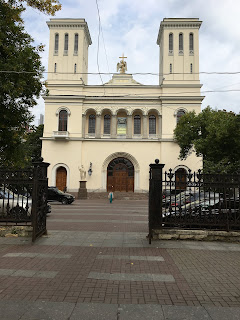 In August I had the chance to visit one of the oldest and largest churches in St. Petersburg - the Lutheran Church of St. Peter and St. Paul on our main street Nevsky Prospect. Known by most as the German Lutheran Church, this congregation was started in the early 1800s by (you guessed it) German immigrants. By 1917, St. Peter Lutheran Church had 15,000 members. And then the Revolution took place... All Lutherans in the city were persecuted and the churches basically dismantled during the next fifteen years. The Soviet government took over the buildings turning some into barns, granaries, movie theaters, and concert halls. St. Peter's had a different purpose in its future. They turned this church into a swimming pool for high-dive competitions. Showing how deep the pool is The church used to have the main floor worship area and two balconies to hold all the worshippers before 1917. When the Soviets took over the church, they built a huge concrete swimming pool from the
Post a Comment
Read more

Last month I toured the first stone building that was constructed in St. Petersburg. The Menshikov Palace was built from 1710-1726. It was started the same year as Peter the Great's first palace, but took many years to complete because it was assembled in several stages. The model below shows how massive of a structure the palace really is. Model of the palace It was built as the residence for the first governor of St. Petersburg, General Alexander Menshikov. In 1711, he and his family moved in, well before it was finished. When he was stripped of his titles by Peter II in 1727, he was banished to Siberia. It hasn't been a residence since then. After he left, his palace was occupied by the First Cadet Corps for many years. Today it's part of the Hermitage museum. Ovens in kitchen from the 1700s  From the period kitchen to a room full of weapons from the Cadet years, the palace had many interesting aspects to see as we toured the museum. Large pot in whi
Post a Comment
Read more

Self-portrait as a young man Living in St. Petersburg has broadened my knowledge of Russian authors and this week a Russian artist. His name is Ilya Repin. Born in 1844, Repin was to Russian art as Tolstoy was to Russian literature. When I was in school, I was familiar with Leo Tolstoy's writings, but somehow my education never got as far as Ilya Repin's artwork, however. That all changed on Thursday when I attended the exhibition in honor of the 175th anniversary of Repin's birth at the Russian Museum. The first painting that we came across in the exhibition was "The Revival of the Daughter of Jarius."  It was nice to see this picture, displaying Jesus' miracle, as most important to the museum. His daughter sleeping The exhibition included 250 paintings and graphic works of Repin. Many of the works on display were portraits that Repin completed for famous Russians of his time including Czar Nicholas II. Other portraits include Leo Tolstoy, A
2 comments
Read more
More posts