Showing posts from October, 2019
Show all

Last month I toured the first stone building that was constructed in St. Petersburg. The Menshikov Palace was built from 1710-1726. It was started the same year as Peter the Great's first palace, but took many years to complete because it was assembled in several stages. The model below shows how massive of a structure the palace really is. Model of the palace It was built as the residence for the first governor of St. Petersburg, General Alexander Menshikov. In 1711, he and his family moved in, well before it was finished. When he was stripped of his titles by Peter II in 1727, he was banished to Siberia. It hasn't been a residence since then. After he left, his palace was occupied by the First Cadet Corps for many years. Today it's part of the Hermitage museum. Ovens in kitchen from the 1700s  From the period kitchen to a room full of weapons from the Cadet years, the palace had many interesting aspects to see as we toured the museum. Large pot in whi
Post a Comment
Read more

Self-portrait as a young man Living in St. Petersburg has broadened my knowledge of Russian authors and this week a Russian artist. His name is Ilya Repin. Born in 1844, Repin was to Russian art as Tolstoy was to Russian literature. When I was in school, I was familiar with Leo Tolstoy's writings, but somehow my education never got as far as Ilya Repin's artwork, however. That all changed on Thursday when I attended the exhibition in honor of the 175th anniversary of Repin's birth at the Russian Museum. The first painting that we came across in the exhibition was "The Revival of the Daughter of Jarius."  It was nice to see this picture, displaying Jesus' miracle, as most important to the museum. His daughter sleeping The exhibition included 250 paintings and graphic works of Repin. Many of the works on display were portraits that Repin completed for famous Russians of his time including Czar Nicholas II. Other portraits include Leo Tolstoy, A
2 comments
Read more 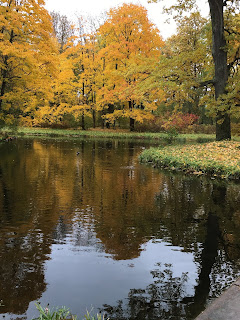 A week ago, we returned to St. Petersburg with all its fall colors. As we flew back into Pulkovo Airport, we could see the golden colored birch forests below us. It was a beautiful sight. Along with the colored trees, the rainy season is upon us in full force. It has poured all morning here, but we've only got a 40% chance for the rest of the day. The long range forecast is rain every day for the next week. We're used to that here. The sun is showing its face later in the morning all the time. If you stay in bed until it's light out, you'd already be late for work. Sunrise is at 7:30AM and coming up later every day. Nothing new for us here either. I got a haircut this week which isn't too unusual. I must say that it's a rather interesting procedure when the person cutting your hair can't speak the same language as you do. When we moved here, I prayed hard and went to the local hair salon. Of course, no one spoke English. I picked out a beauti
Post a Comment
Read more 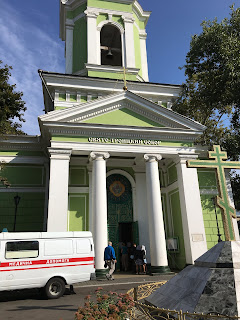 Orthodox Church And guess what. It's not about President Trump and impeachment! People in Ukraine aren't concerned with the phone call between Trump and their president. They are more concerned about running water in their cities (Here in Odessa, the entire city was without water for 24 hours the day after we arrived.) They are more concerned about electricity for their homes. (The power was off for 18 hours on a different day.) We've been sitting in Odessa, Ukraine for the past week and a half while my husband was doing a seminar here. I took the opportunity to visit several churches of the city and will share what I saw with you. Ukranian Orthodox Cathedral The main religion here is the Ukranian Orthodox Church which is similar to Russian. We stopped in the cathedral in the city. It was very beautiful on the inside. The arched ceilings were decorated with pictures and gold ornamentation. Domed ceilings and golden chandeliers lined both sides of the
Post a Comment
Read more
More posts