Showing posts from September, 2018
Show all

Russians Do it the Hard Way 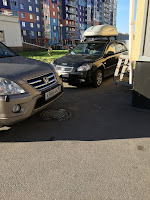 We are always amazed how people park their cars in our apartment complex. Often cars are parking others in with absolutely no way for them to get out. I have no idea what drivers do when their car is parked with someone right in front of them. We're just glad that we don't have a car to deal with here. This summer, we think that the complex owner tried to solve this problem. A couple men were in the parking areas to paint white stripes so cars would know where to park. There was one problem, though, when they were doing this job. They never asked the drivers to move their vehicles. The result is that some of the parking spaces are very wide and some are very narrow.  It really didn't matter where he painted the strips at all. People still park wherever they feel like parking.  Partially painted line It was very interesting to watch the men work on this project.  Unfortunately, I didn't think to take a picture, but the two men measured the stripes out very ca
Post a Comment
Read more

A Night on the Town 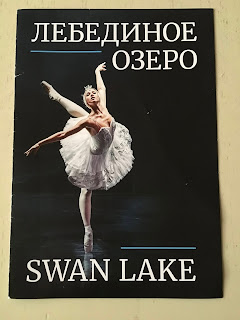 I've been told that the thing to do when you come to Russia is to see a ballet. I had never been to one before, so I jumped at the chance to go see "Swan Lake" by Pyotr Tchaikovsky with my friend when she suggested it. For some reason, my husband declined to join us in the adventure. HMMM... We attended the ballet with a group from our Russian language school where we had a meeting explaining the plot prior to the start. The theatre alone was amazing to see. The gold and ornamentation on the stairs and hallways was truly magnificent. The chandelier sparkled it's beauty as we climbed to the second floor. We felt like we were rubbing shoulders with the high society of St. Petersburg. When the music commenced, the real magic began. The story of the ballet was revealed before our eyes without a word being spoken on the stage. The program gave a summary of the plot, so we knew what would happen in each scene, but I found it fascinating to watch it unfold.
Post a Comment
Read more 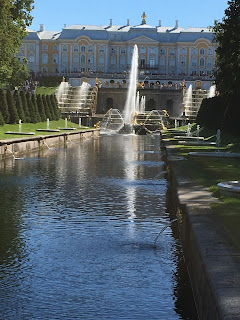 View up the channel toward palace Several weeks ago we took an excursion on a hydrofoil to a palace about ten miles southwest of St. Petersburg. On the shore of the Baltic Sea, Peterhof Palace was built by Peter the Great as a summer residence - a place to escape the heat of the city during the summer months. He planned the layout of the spacious gardens and numerous fountains in the early 1700s. View from palace toward the sea A visitor has to walk along a channel linking the ocean with the palace. Originally, the Sea Channel was built to access the palace by boat, but today it's part of the breath-taking view as you approach the palace. Grand Cascade with palace chapel in background Peter the Great built his summer home high on a bluff, planning the fountains that today grace the front of the building. The Grand Cascade, with its 64 fountains, open into the main fountain, where Samson battles the lion. In this fountain, designed by a Frenchman, water shoots from
Post a Comment
Read more 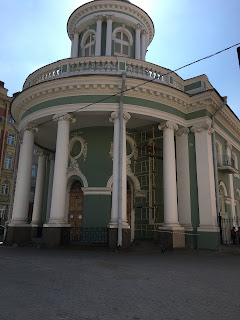 St. Anne's Lutheran Church Since we've moved to St. Petersburg, we've worshipped in an English service every Sunday at St. Anne's Lutheran Church. St. Anne's, a member of the Evangelical Lutheran Church of Ingria, is the oldest Lutheran church building in St. Petersburg, built in 1779. During the last half of the 19th Century, this church was one of the most important Lutheran churches in all of St. Petersburg. But that all changed by the 1930s when suppression of churches was the norm under Soviet rule. By the beginning of WWII, there were no more functioning Lutheran churches in the city. St. Anne's in early 1900s When all the interior was stripped of anything religious, St. Anne's church was used as a cinema. After the fall of the Soviet Union, the small congregation that remained, petitioned the government to have the building restored and returned to the Lutherans. It was going to be returned on December 6, 2002, but a mysterious fire broke
Post a Comment
Read more
More posts