Showing posts from February, 2021
Show all

The Bluffs of Latvia 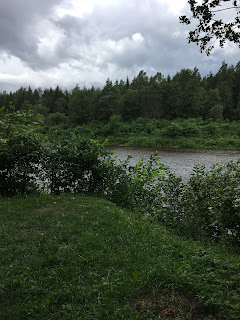 Amata River  The country of Latvia is generally flat. We've driven around in it enough to attest to that. It has rolling hills south and west of Riga, and of course, the man-made hill in Riga itself.  So, we were surprised by the gorge running between the castles that we've seen over the last couple weeks. This river and surrounding gorge compromise Guaja National Park which covers a large part of central Latvia northeast of Riga.  Scenic walkway Since we were in the area visiting castles, we decided to check out the national park and the small creeks winding throughout it. Our trusty travel guide informed us about a walking trail to see some of the cliffs.  It was amazing to be winding through the Latvian woods after experiencing city life up to this point. We thoroughly enjoyed the peace and quiet of the deep forest.  Red cliffs  We came upon the red cliffs with the small caves worn into them. The rushing of the spring rivers helped to cut the holes into the rock walls. We ne
1 comment
Read more 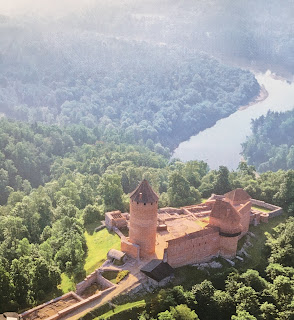 Aerial photo of Turaida The last castle, that I wanted to show you, has the most tourists to its site because it's restored more than any or the other ones. Turaida Castle, located along the Guaja River valley, was the third castle in the triangle with Sigulda and Krimulda. Turaida was seen from the viewing tower when we were at Sigulda (photo from my post two weeks ago). Tower All three were on the edge of the river gorge with Sigulda being the lone one across the river. They were all built by the Livonian order so kept their eyes on each other.  Originally built in 1206, Turaida was constructed of wood which, of course, was destroyed by fire. Later it was rebuilt with stone. This castle has been under reconstruction since the 1950s, which is why it's the most visited castle in Latvia.  Southern wall and tower The 30 meter tower stands at the entrance to the main part of the castle. The southern wall and semi-circular tower have also been reconstructed on the old foundations
Post a Comment
Read more 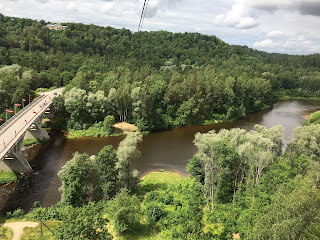 Guaja River gorge view from cable car This week we're taking a bit of a break from castles that we saw because this castle doesn't exist any longer. Last week I told you about the view over the Guaja River, and today I'll tell you how we explored the other side of the gorge. Krimulda ruins The castle that doesn't exist any longer is the Krimulda Pils. It was built about the same time as the Sigulda Castle and was destroyed in 1601 in a war with their enemies from across the river. It was never rebuilt again. From the Sigulda tower on the edge of the ravine, soldiers could look across the gorge and watch the comings and goings at the Krimulda castle.  All aboard! Today the only way to access the Krimulda area from the Sigulda side is via a cable car. We decided we were brave enough to check it out, so we enjoyed a ride 40 meters above the river.  Krimulda Manor The cable car let us off on the site of Krimulda, which today is the home of Krimulda Manor. This manor, origin
Post a Comment
Read more
More posts