Showing posts from November, 2017
Show all

Churches I Have Seen 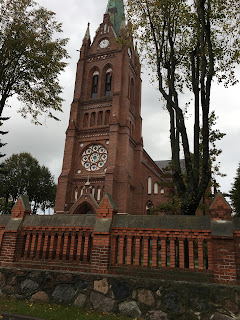 Most churches are centuries old  Many are very large We have seen so many beautiful churches since we moved over here, so this will be a picture postcard of churches in Europe. Some are built since freedom Furnished with a lovely wooden altar and pulpit  We visited this Lutheran church in Lithuania when my husband presented at a conference. When the Russians gave them freedom, they had to build a new church. The stained glass windows take your breath away.  They often depict Bible stories in them. These windows were in the cathedral in Prague. The pictures don't do justice in showing how immense this cathedral was. Here you can get an idea of the height of the ceilings with the window in the rear of the church. The ceiling had pictures painted on it This unique church was St. George's in the castle grounds. It had an upper and lower altar. Many churches are massive looking on the outside as well as on the inside. It&#
Post a Comment
Read more 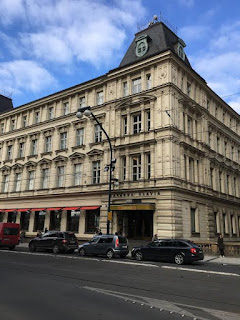 Kavarna Slavia Prague is known for it's many and varied restaurants and cafes, but the Karvarna Slavia is one of the most famous in the city. This karvarna, or cafe, open since 1884, is located in the perfect spot. It's right on the Vtlava River front with a beautiful view of the Prague Castle across the river. It's also across the street from the National Theatre. Because of this ideal location, Karvina Slavia has a history of being visited by famous people. The theatregoers step across the street for pre- and post-show drinks. They can enjoy the view of the river traffic as they chat with their friends. View across the river Among these famous patrons, Vaclav Havel was often seen in the Slavia. Havel, a rebel playwright, would gather with his friends in this restaurant often in 1989. That was the tumultuous year when Communist ruled people in Eastern Europe held mass protests against the government. Havel was one of the leaders in Prague who organized the stud
Post a Comment
Read more 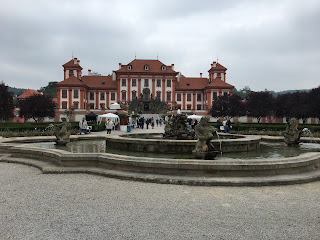 During the early fall in Prague, Vinobrani, or wine festivals, are held for several weeks in different locations in the city.  On the last weekend of September, my husband and I went to check one out. It was located at the Troja Palace, built in the late 1600s for a royal count. In the sculptured chateau gardens, local vineyards set up booths where this year's wines could be tasted and sold. The Czech wines,  mostly white varieties, were very different from California wines. Just walking around the gardens and looking at the beautiful palace made the day special for me. Today the chateau is owned by the city of Prague and houses an art gallery. We didn't take the time that day to go through the museum. That's on our bucket list of things to do. The area around the original riding stables was set up for tasting wine while watching entertainment. They had singers/dancers from the Medieval Era as well as the Roaring Twenties. As we sipped our wine and l
Post a Comment
Read more 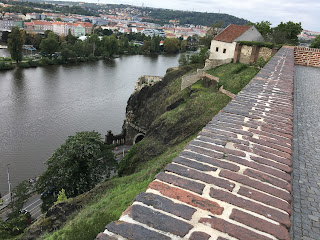 Castle wall overlooking Vltava River Prague has two castles - one on either side of the Vltava River. The larger of the two has been swamped with tourist since we arrived, so we haven't been there yet. The smaller one Vysehrad is a quiet historic fort which we visited a while ago. Vysehrad, the older of the two, was originally built in the 10th Century. It was surrounded by a wall on a steep cliff to protect the Czech sovereign. Many years later the government of the country and city of Prague moved across the river to the newer castle. One of the towers in Vysehrad is the oldest rotunda in Prague. Built in the 11th century, the Rotunda of St. Martin was once used as a gun powder storage area. Today it is used for religious purposes by the Vysehrad ecclesiastical chapter. Within the walls of the castle is the Basilica of St. Peter and St. Paul. This beautiful church was started in the 11th century, but had additions and was remodelled in the 14th and 19th centuries
Post a Comment
Read more
More posts