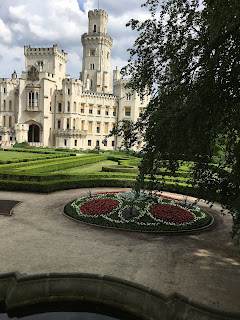 Since we've lived in the Czech Republic, we have gotten used to the idea of people visiting a nearby castle on their day off.  We haven't had any opportunities like that because we lack the car to go on a Sunday drive. Therefore, one of my goals during our May vacation was to see a Czech castle on our drive to Austria.

After doing my research online, I found such a castle in Hluboka nad Vltavou. The fairytale castle was situation on a bluff above the Vltava River.

When we arrived in the town below the castle, we noticed that signs, directing tourists up the bluff, were labeled "zamek." After finding that word on Google translate, we learned it means chateau in Czech. So, were we visiting a castle or a chateau? 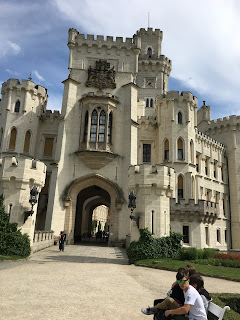 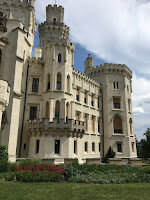 From all outward appearances, the building looked like a castle - turrets, a drawbridge, parapets, and battlements. It was rather magnificient as we walked toward it, fitting my idea of a fairytale castle.

However, it didn't have a moat around it. Instead it was surrounded by sculptured gardens which added to its beauty. A very impressive sight. 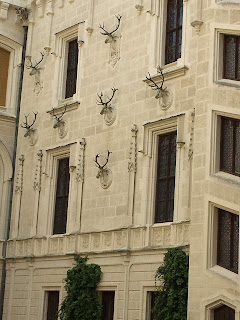 We learned that the castle was very old, built originally in the 13th century. I'm sure the original castle must have had a moat around it. It was rebuilt on the same site several times, the last being in the 19th century by Johann Adolf II von Schwarzenberg who wanted to mimic England's Windsor castle. 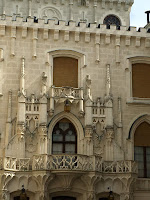 Schwarzenberg rebuilt this chateau to use for his hunting lodge in the southern Bohemian countryside. The inner courtyard was lined with the mounted antlers of his successful hunting trips.

I was amazed to see the intricacy of the detailed scrolling around the balconies in the inner courtyard. The workers during that century certainly knew how to add beauty to a building. 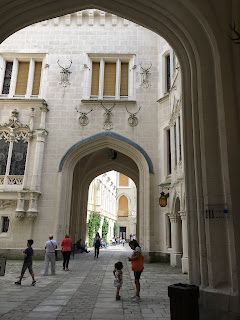 Unfortunately, we weren't allowed to take pictures of the inside of the chateau. We toured one floor of the huge dwelling. The rooms were filled with period furniture, dishes, etc. The interior of the house struck me as being very dark with woodwork covering the walls as well as the floors, and even, in some cases, ceilings. I would not have wanted to live in the dark rooms. It left me feeling depressed.

With the chandeliers, original art work, and statues, it all was very extravagant by our standards. I asked myself several times how much money did it all cost - and for a hunting lodge that was used only a couple months of the year.

To see some pictures of the inside of the chateau see this link Zamek Hluboka. Click on "Tours" for a few more pictures.

I definitely would call this structure a chateau that was built to look like a castle. Johann Schwarzenberg must have been a man who liked to flaunt all his money to impress his hunting friends, but it was worth seeing all the same. It's not something you see every day - even if you live in Prague.