The Mystery is Solved

By connie cortright.com December 04, 2018
When we first moved into our flat, the skeleton of the building across from us was dubbed "the Hulk."  I thought that name very fitting. I had imagined that right after freedom here in the early 90s someone had purchased the land and started a building. After he ran out of money (remember I'm surmising all of this), someone else purchased the land around the hulk and built up the strips around the hulk into the complex in which we now live. 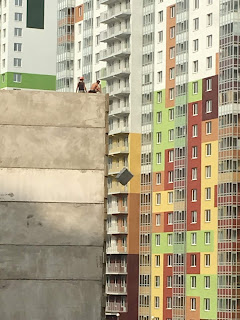 Now I know that I guessed wrong. I even lost a bet with my hubby and had to buy him a pizza. The Hulk has changed much since July.


We first noticed action over there when we saw men on the roof of the building pushing large bundles over the edge and having them crash on the ground four stories below. I took a picture of it, but don't know if you can see the bundle half way down. We now think that they were pushing insulation over the edge because it had been sitting on the roof in the rain for so long and now ruined (my imagination again). 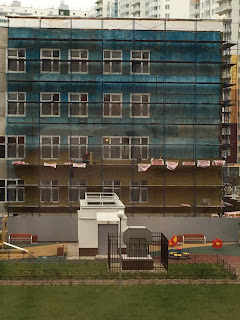 After that time, they delivered new "insulation" and started putting it up around the outside of the building. It appears that this material is about six inches thick and is glued to the cement walls. Before this was applied to the outside of the building, they coated the wall with a blue substance. It was interesting to note that the cement building had a very flat surface before the insulation was added.  The windows were installed into the openings flush with the outside walls. 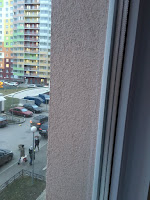 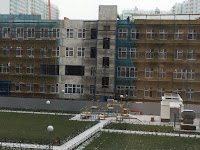 After the brown material was applied, the windows now have window sills. The picture out our window on the right shows how thick this insulation is. It looks like stucco will be added to this surface and later paint.


They've made progress quickly on this building which I can no longer call the Hulk. In two weeks time, the wall that faces our apartment is almost completely finished. 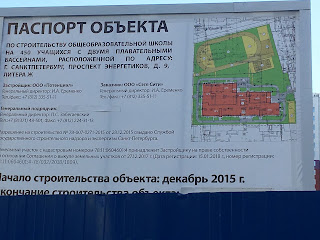 And this week, we've finally discovered what this building is all about. My husband walked around the complex one day and came back to inform me that we will have a school in our midst soon. There was a sign posted on the opposite end of the complex labeling it as such, "школы" as the sign says. The sign looks like it will include a track, also. 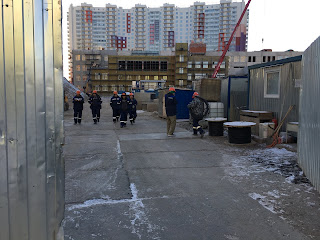 The picture to the left shows the work site from the opposite end with our twenty-one story building behind it.


Building complexes with schools in the middle are very common in St. Petersburg. We often see signs for new apartments that have schools on the property. I probably should have guessed that ours would be the same. That wouldn't have been as much fun as coming up with the history of the Hulk, though. 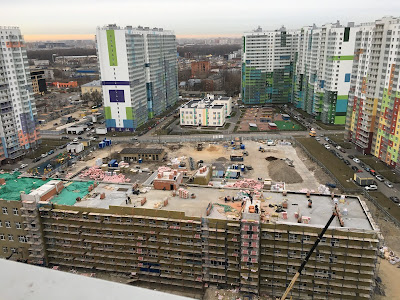 Over the weekend, I went up to the 21st floor of our building to take a picture of the whole project. I'm very glad that we live on the third floor, but the view is very revealing from up there. It was interesting looking down at all the men working on the roof of the school (in 6 degree wind chill). Usually we look up to the roof from our window. Seeing things from a bird's eye view gives one a different perspective.