The Legend of Lielais Kristaps

By connie cortright.com May 05, 2020
Riga has another statue that is located only a block from our flat. It's called the Big Christopher (Lielais Kristaps in Latvian) statue.

The interesting thing about this statue is the story behind it. According to the legend, a kind-hearted giant, originally named Offero, lived near the Daugava River. He would carry people across the wide river on his shoulder if they needed to get to the other side.

One day a small boy asked Offero to carry him across the raging river. He sat on the giant's shoulder as he walked through the river, but the farther the giant walked, the heavier the child became. After struggling, the man finally reached the opposite shore.


The boy then explained that he was the Christ and the burden the giant carried was the sins of the world. He then baptized the giant and renamed him "Christopher" because that means Christ-bearer. After Christopher returned home, he found a pile of gold waiting for him. He used the gold to build the original city of Riga on the shore of the Daugava River.


Of course, this version of the story does not match the version that is posted in the shelter with the statue. To read that version see below: 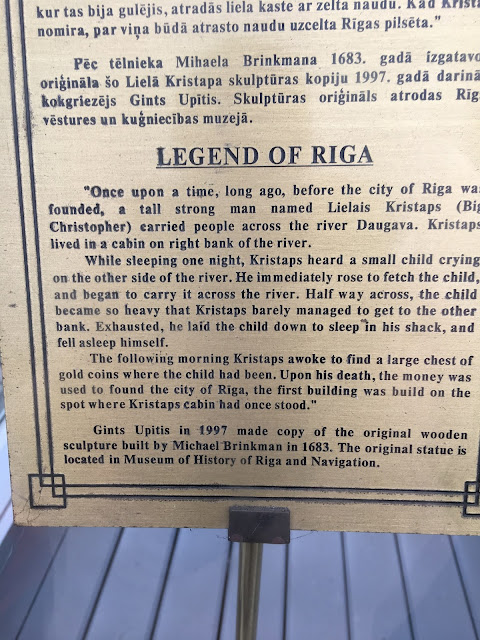 
This shelter is located on the walkway along the bank of the river for all the tourists to see.  We walk past it every time we head to the grocery story across the river.


Another place to check out when you visit Riga.