By connie cortright.com August 05, 2020
The country of Lithuania has an interesting place to visit near the border with Latvia. We had previously heard about this site and wanted to check it out.

It's a small hill where a Latvian fort had been built in the early 1800s. When Lithuania lost a war to the Russians, the families of the dead soldiers placed crosses on the hill near the fort. It brought comfort to the Catholic families. 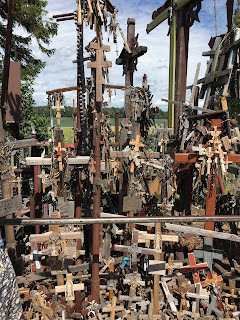 From there, the tradition of believers coming to the hill to leave a memorial cross for loved ones grew. The Lithuanian people prayed for peace, for their country, and for their loved ones as they planted these crosses.


Today there are estimated to be more than 200,000 crosses of every size imaginable on the hill. Rosaries are hung by the handful on some of the crosses.


During the Soviet occupation from 1944 to 1990, this small hill drew the ire of the USSR rulers. On at least three occasions, the Soviets took bulldozers up the small hill and pushed down every single cross. They wanted to rid the country of the display because the Lithuanian people couldn't practice any religion under Communism. 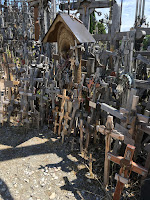 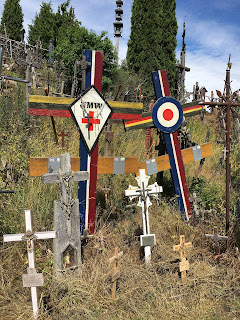 As soon as the bulldozers left, the crosses would reappear on the hillside. The government couldn't erase the love for God from the hearts of the people. For the Lithuanians, this was also a way to peacefully resist the unwanted rulers.


Besides all the crosses placed by people from the Baltic States, we saw crosses from many other countries brought to the hill by soldiers serving at the nearby NATO military base. We located many from the US.


After freedom reached the Lithuanian people, Pope John Paul II visited their Hill of Crosses, dedicating it as a place of hope, peace, love and sacrifice. He celebrated mass under the newly constructed pavilion.


It's hard to imagine that more crosses can be added to this hill, but crosses are seeping farther and farther away from the base of the hill. It will be interesting to see how large it gets in the next couple years.


We won't forget this experience any time soon.