Buildings in Old Town Riga tell the story of this great city. Just the shape of the building can tell a person how old it is. The building on the right is very old, probably late 15th Century, with several hints to that fact.

First, the protruding wood at the top tells us that originally there was a pulley system installed there to lift heavy objects to the different floors of the building. The items raised by pulleys would be pulled into the building through doors on each floor. Those doors are now just wooden boards.

Another hint of it's age is the size of the windows. Tiny windows kept in the heat during winter. Imagine how dark the rooms would be, however.

The ancient door is hard to see in the shadow, but it is crude wood planks fastened by an iron bar. The door was large to allow the horses and wagons to be brought into the basement. 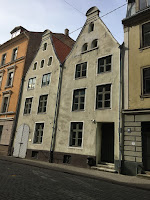 The late 16th Century saw this next type of house. Notice the windows are larger. The old door can still be seen on the left of the building. The buildings were built right next to each other very close to the street.

To the left, you can see how narrow the streets were built during the 17th Century. They haven't changed at all with only pedestrian allowed on this street today.

The buildings built during this time are decorated today for the tourists. Many times they are colorfully painted and turned into restaurants. I'm sure that they were originally houses.

The 18th to 19th Century buildings are easy to spot. They look so similar to the ones we saw all the time in St. Petersburg, Russia. Buildings four to five stories tall, with not too much character at all, built in a row.

Sometimes they added facades on them to make them look fancier. They are more attractive to tourists this way at least.

It's interesting to see buildings that blend the older styles with more current styles of today. An example of this is the home of one of the expensive restaurants in Riga "Key to Riga." This 19th century building was remodeled on the lower floors for the restaurant while still maintaining the turrets from the original building. It makes for an eclectic look.

All of these types of buildings make our walks around Old Town very interesting just looking at the architecture.

Come and join me for a walk about town sometime.