Because of it's size, I need to do laundry almost every day. One load consisted of our two bath towels. It seems ridiculous, but the washer was full with just the two towels. 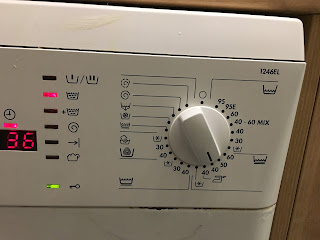 The first time I tried to wash a load, I couldn't figure out how it worked. I mean how hard can it be to use a wash machine. I've been using them for more than 40 years.

The dial looked much more complicated than I'd ever seen. The strange thing to me was that the red numbers in the display window had 137 in it. I wasn't sure what that meant - temperature of the water? speed of the machine? or what? I found out that it actually displayed the amount of minutes that the load took. When I do my wash it takes more than two hours for the machine to finish washing a load. One long time resident declared that the clothes are very clean when they are finished. I guess so after washing so long.

I was also told that it is very common for people to remove their work clothes or Sunday clothes as soon as they walk in the door to keep them from getting dirty. People sit around at home in their skivvies and need to get dressed when they have surprise visitors. Washing machines that have a cycle of 2 hours must wear clothes out quickly.

And then there is the drying process. Most homes in the Czech Republic (and maybe all of Europe) don't have electric driers. They hang their clothes on drying racks or anywhere else in their house. At first, I was astounded to hear about this. If there were places to hang clothes outside on lines, I could understand it, but I've never seen clothes drying outside here. (CORRECTION: TODAY I SAW SOME CLOTHES OUTSIDE ON A LINE) I was convinced that we would have to purchase an electric drier when we moved to Prague.

Now after doing laundry for a couple weeks, I'm not sure what we'll do. I found out that using softener in the wash machine is as important as detergent. The clothes don't come out as stiff as a board after air-drying. 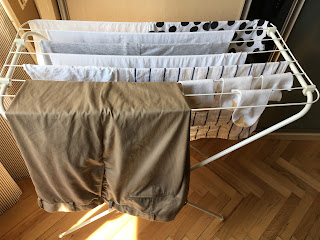 Maybe having a small wash machine is actually preferable to having a large one so that there are fewer clothes to hang around drying. If I do a load of wash in the morning, most times the clothes are actually dry by the time we go to bed.

The towels and sheets are the most challenging. I was actually surprised to find that the softener plus shaking them hard before placing on the rack made them almost as soft as a drier. Almost is the important word here. Sheets are too large to hang on the rack so that is a challenge.

Next week I'll fill you in on how they face that challenge.