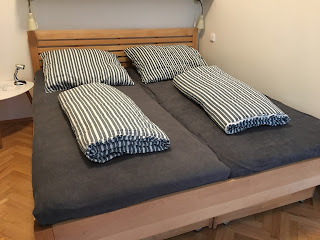 This is what our bed looked like when we arrived in our temporary apartment. It's clearly two twin beds next to each other and next to a wall. But what was with the large pillows? And what were the large "blankets" lying on top? And what were the gray things on the top of the beds?

All of these questions flew through my mind as our landlords were showing us around. During the quick tour, our landlady showed me where there were sheets up in the cupboard in case we preferred sheets. Preferred sheets? Of course, a bed has to have sheets.

After they left, I started checking out the bed. The gray material was almost the texture of terrycloth - but it was clearly not a towel. Well, it didn't seem right to sleep on that material no matter what, so I searched out the sheets. When I pulled them out, I found an off-white soft almost flannel fitted sheet. Two fitted sheets, but no flat sheets in sight. Since I couldn't possibly sleep on the gray cloth coverings, I pulled on the two fitted sheets. 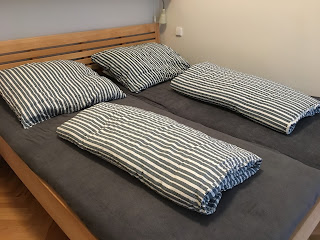 Now what about a top sheet. When it was time for bed, we covered up with the thick quilt like objects on each of our beds. I was so hot that I couldn't sleep through the night. And of course, I wouldn't sleep on the large pillow since it had a special cover on it. Thankfully, I'd brought my own small pillow along with me from home.

The next day I did some checking online to find out what was with the beds. The large quilt thing is called a duvet - pronounced duvay. It has a covering on it that is considered the sheet that gets taken off and laundered when necessary. The large pillows are typical for Europe, although I can't imagine anyone actually sleeping on them.

After the first night, I found an extra duvet covering in the cupboard which is now my sheet to cover me up at night. I've never used the duvet again since it's so hot for the summer. There is some advantage for each of us to have our own blanket on the bed. I can curl up in my covering and don't worry about my husband stealing it away in the middle of the night. :) But crawling into bed by the wall leaves something to be desired.

Several weeks ago, we were shopping in a department store and saw the exact same gray items (along with many other colors) sold as sheets. That explained things for me. So I guess I can sleep on the gray sheets before we move out of this apartment. We also discovered that the duvet covers came in many colors and styles as well. I learn something new every day over here. 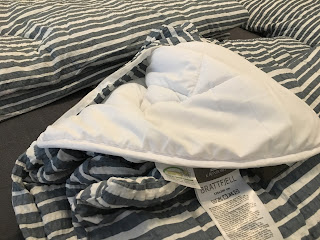 So, how do European wives deal with laundering these bed items with only the drier racks to dry them. Basically, I found out that they don't deal with it often. The sheet and duvet covers are washed once a month, or twice at most.

By all accounts, the duvets are hard to stuff back into the covers. The covers have a zipper on the short end to pull out the duvet before throwing the cover in the wash machine. When it is dry. there are all sorts of tricks to get the duvet stuffed back inside. The hard part is stuffing it all the way to the corners without having any lumps. Since I sleep with only a duvet cover, I don't have to worry about this process.

Hopefully when we get our own apartment, I'll be able to have regular sheets where I won't have to deal with the dreaded duvet cover very often. But I think from now on, I'll agree with George Costanza (from Jerry Sienfeld) - untuck the sheet at the end of the bed.