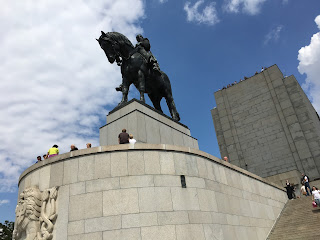 Last weekend we witnessed the Battle of Vitkov Hill in Zizkov, Prague. Actually the battle took place on July 14, 1420, but each year it is reenacted at the location of the original battle, where today stands a monument to this victory.

The battle was between the followers of Jan Huss (Hussites) and the Catholic Crusaders led by Emperor Sigismund.  During the five years prior to this day, the Hussite War (see my post from July 4th in reference to this war) had raged between the Hussites and the Catholics for the lands in Bohemia and Moravia (current Czech Republic). The Hussites had been winning control over more cities in Bohemia including Prague.

During the month of June, 1420, the Crusader knights battled to regain control of Prague by holding a siege against the city. The Hussites under command of Jan Zizka held the high ground, building a fort on the peak of Vitkov Hill east of the town of Prague. On July 14th the Crusaders, with an army numbering in the thousands, tried to take the city back and attacked the Hussite fortress on Vitkov Hill. Even though the Hussites were greatly outnumbered, they prevailed against the Catholics and drove them over a steep cliff on the hill toward the Vltava River, where many knights drowned. 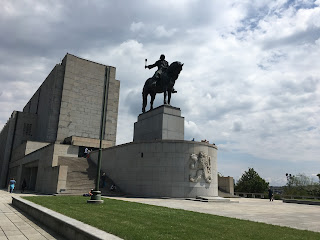 To show the importance of this battle, the area around Vitkov Hill was renamed Zizkov in honor of Jan Zizka. A statue of Zizka also commemorates the site. Built in 1950s, Commander Jan Zizka, sitting on his horse, is one of the largest equestrian statues in the world standing 30 feet high - with the pedestal, a total of 72 feet. It weighs 16.5 tons. Behind the monument to Zizka, a large museum was also built in the 1920s telling the history of this important time. 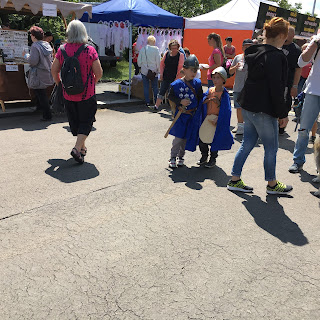 During the festival, the top of Vitkov Hill was filled with people in Medieval clothing playing period instruments, dancing, and juggling. There were demonstrations on Medieval fencing and food preparations. Of course, there were vendors selling wooden swords and shields for children as well as trinkets for adults. Several knights mingled in the crowd of people, but they weren't quite as scary looking as the knights on horses almost 600 years ago.