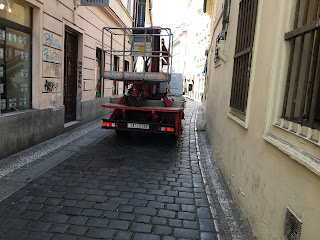 The streets of Europe seem to have a story to tell by themselves. In Prague, the oldest parts of the city have the narrowest streets. Of course, that's not much of a surprise. They weren't built for car and truck traffic hundreds of years ago.

Some streets are hardly wide enough for a car to pass through. In the area close to our church, a pedestrian has to back up against the wall of the building when a truck drives down the street. Of course, most of the time pedestrians occupy the center of those streets. 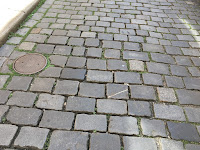 One thing is certain about the old streets in central Prague. They are all made of cobblestones. Some of the cobbled streets must be hundreds of years old. When I take a look at them, I'm sure I'm walking on ancient history. The stones are laid out with either small gravel or dirt between them. As you can see, grass sometimes grows between the stones since these narrow streets don't see much vehicular traffic. I'm sure that the roads have been repaired in the past with new stones laid in some places, but they sure look old. 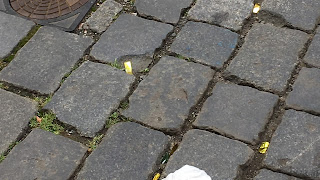 Since the cobbles are so old, they are very uneven on the surface. It's easy to twist an ankle if you're hurrying on the cobbles too quickly, even in a sturdy pair of tennis shoes. Believe me, I've done that already.

The amazing thing is that I've seen women walking on these old cobbles in high heeled shoes. I can't imagine how they manage not to sprain an ankle every day. If I needed to wear fancy shoes somewhere, I'd wear walking shoes to travel in and put on the good ones when I arrive. That's the norm around here. 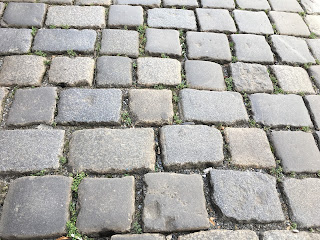 I often wondered how thick those cobbles are since they have lasted through so many years. My question was answered one day. We came upon a construction crew that had torn up a section of the cobbles. The cobbles, that had been uprooted for the construction, were piled to the side. Each one was about eight inches thick. No wonder those roads last so long. How long would it take for those stones to ever be worn away?

When I walk on these cobblestone streets in Old Town Prague, I feel history beneath my feet.