Adventures in Cooking in Prague

Since I described my spicy experiences in Prague last week, I thought I'd continue by explaining about my cooking adventure a while ago.

We'd been here for a couple months and had been eating potatoes, vegetables and meat for dinner way too often. Of course, that was mainly because we were in the Air B&B apartment for six weeks where I had very little kitchen equipment. I had to make very simple meals due to lack of utensils, spices, and baking dishes.

After we moved to our permanent apartment, I could start cooking again. When we had some left over chicken in the refrigerator, I decided I wanted to make a casserole to use it up. So I became adventurous and found a recipe for a Cheesy Chicken and Rice Casserole on the Campbell's.com website. I was excited to try the new dish.

After looking at the list of ingredients, I was ready to take on this challenge. I knew that I could get rice, cheese to grate, and frozen vegetables. Also, the recipe was published in the states, so it was obviously written for cups, teaspoons, etc. Thankfully, I came prepared when I moved over here with my US measuring cups and spoons sets. The only thing that I was worried about was the Campbell's Cream of Chicken Soup. 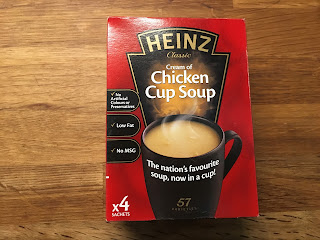 Armed with my grocery list, I went downtown to a big grocery store, knowing that our local market wouldn't have what I needed. After searching the shelves in the section of soups, I became disheartened.

I found out that soups, like the spices, all come in packets that need to be combined with water, etc. I looked high and low for Cream of Chicken Soup. I would have even settled for Cream of Mushroom Soup packet if I could find one. Of course, you need to remember that these labels were all in Czech, so the Google translate on my phone was put to heavy use that day.

Finally, I spotted the box of Heinz Cream of Chicken Cup Soup box. Success, sort of. And it was in English! When I looked at the back of the box, I saw to add the mix to 230 ml of water. The detailed English directions for making the mix were covered up with a CZ sticker which I couldn't read. But, feeling like I could proceed with my casserole, I returned home with this box and the rest of the ingredients.

When I reached home, I tried to figure out how I was going to make cup of chicken soup into a can of soup. Ounces vs. milliliters. Plus, how many ounces were in a can of cream of chicken soup?  I never did find that out, even after searching on the internet. After spending much time on the computer with conversion tables, I guesstimated that I had to make two packets of the soup to make about equal to a can of soup. Suffice it to say that opening up a can of soup would have saved me lots of time - and mess in my kitchen.

In the end, the recipe tasted fine. We decided that I should make it again sometime. I still have the other two packets of Cream of Chicken Cup Soup in my cupboard, so I'm sure I'll do that someday.

Now when I'm looking for new recipes to make, I immediately ignore any that have a can of soup of any kind in it. I'll probably stuff my suitcase with Campbell's cream soups when I'm home in November.