The Gorgeous City Lights of Prague


A couple weeks ago, we ventured out on the town after dark. The city teamed with people as much in the evening as during the day. Enjoy the view!

We walked into the square in Old Town where there is music playing almost constantly by one street vendor or another. On the evening we visited, a rock band was performing. Maybe that was the reason for the crowd. 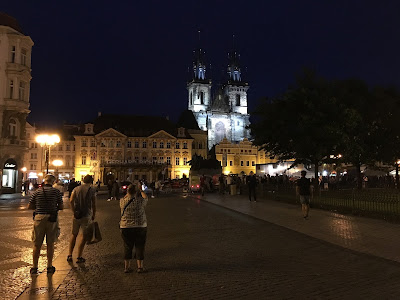 The towers of the Tyn Church were lit up in the background. The spires, reaching up into the sky, can't be seen very well in this photo. It's been said that they inspired Walt Disney's rendition of the castle in Disney World.

Also, near Old Town Square is the astronomical clock. Every hour when it chimes, it puts on a show for all who are watching. The twelve apostles march out of one door near the top of the clock and go into the other door before the rooster chimes the hour. 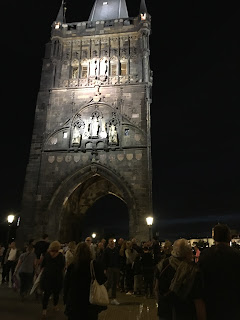 This is the tower that watches over the Charles Bridge - a main attraction for tourists to Prague. This tower was built in the 14th Century by King Charles IV. The beautiful tower is decorated with statues on it. 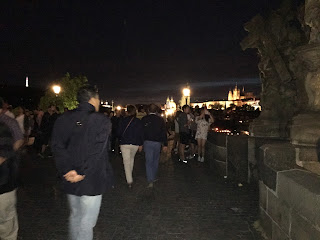 This is a picture of tourists on the Charles Bridge - Karluv Most in Czech. It crosses the Vtlava River also called Moldau River in Germany. It's beginnings go all the way back to 1357 and was the only bridge to cross the Moldau until 1841. It therefore made Prague an important trading route between Eastern and Western Europe for centuries.

It's lined with 30 statues on either side of the bridge and is entirely a pedestrian bridge today. The Prague castle can be seen up on the hill in the background.


Come and visit us sometime so we can show you these up close and personal!