By connie cortright.com November 21, 2017
Prague is known for it's many and varied restaurants and cafes, but the Karvarna Slavia is one of the most famous in the city. This karvarna, or cafe, open since 1884, is located in the perfect spot. It's right on the Vtlava River front with a beautiful view of the Prague Castle across the river. It's also across the street from the National Theatre.

Because of this ideal location, Karvina Slavia has a history of being visited by famous people. The theatregoers step across the street for pre- and post-show drinks. They can enjoy the view of the river traffic as they chat with their friends.

Among these famous patrons, Vaclav Havel was often seen in the Slavia. Havel, a rebel playwright, would gather with his friends in this restaurant often in 1989. That was the tumultuous year when Communist ruled people in Eastern Europe held mass protests against the government. Havel was one of the leaders in Prague who organized the students in November, 1989, leading up to the Velvet Revolution, which freed Czechoslovakia from Communist rule. 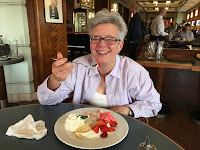 President Havel visited his favorite restaurant often even after he became president. In fact in 1997, he pulled strings to get it reopened after it was closed because of a business dispute. I'm sure the owner was thrilled that the president of the country was a frequent patron. 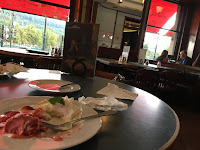 In August, my husband took me to this historical restaurant. Just sitting in the 300-seat cafe was an experience in itself. The windows in the cafe advertise another fact that makes this eatery unique - it's air conditioned. Not many businesses in Prague can boast this fact, so Slavia is packed in the summer with people who are trying to escape the hot, humid weather. 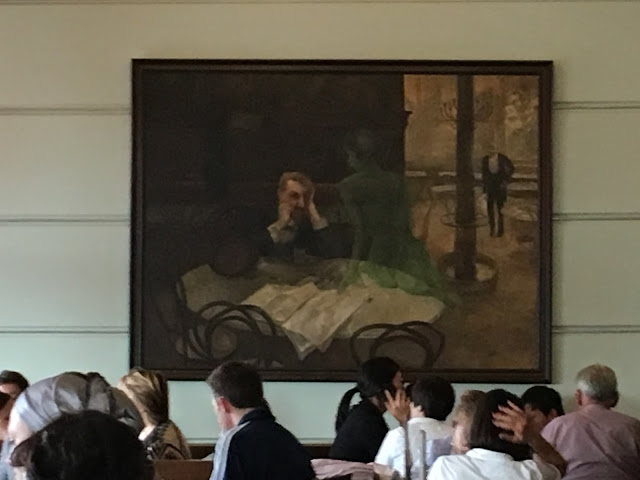 The patrons of the restaurant enjoy a famous painting by Viktor Oliva called "Absinthe Drinker" which dominates the wall above the most-reserved tables in the cafe.

As we watched people come and go in Karvarna Slavia, we marvelled at the culture and history that took place where we sat. Add this location to your list of "to dos" when visiting Prague.