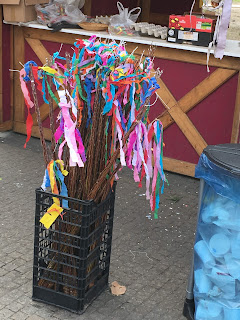 The day after Easter must be a holiday in the Czech Republic. The banks and post office are closed. Most businesses are closed and the government is shut down. In the US the day after Easter was never a day off of work, but here the streets are deserted as if it were Christmas.

After doing a bit of research, I found that today is the day of the pomlazka. Since you've never heard of that, I'll explain. 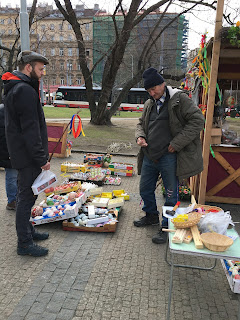 This tradition dates back to pagan days when it was a rite of spring, a rite of fertility. Boys or young men chase girls or women around with a pomlazka and whip them on the back of the legs. It's supposed to bring youth and beauty to the girls that are whipped. A pomlazka is the Czech word for a switch made of young pussy willow twigs. This whip is decorated with multi-colored ribbons on the end that strikes the girls.


Of course, it's all in fun, but I can't imagine what Czech women actually think about it. When traditional Czech clothing was worn, the switches probably couldn't be felt through all the layers of skirts and ruffles, but today with blue jeans, I imagine it can really sting. The woman rewards the boy by tying her own ribbon to the end of the pomlazka. Rewards also include candy or a shot of plum brandy. 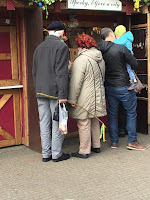 I've been told that men enjoy this tradition and visit many women on this day including their aunts, cousins, grandmothers, friends, and, of course, girlfriends. By noon, I'm guessing some men are pretty well sloshed from all the shots that they have consumed. 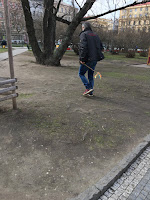 I walked around in the city today to see what evidence of this tradition I could find. I did see a few men carry the pomlazkas in their hands, but that's about all. The tradition must be carried out at people's houses and not in public (which is probably a good thing). 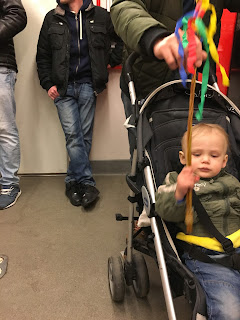 Czechs must take the tradition pretty seriously, though, because they pass it on to their sons at a rather young age.

Maybe women and girls don't complain about the switches too much because the alternative to using them is dumping water over the girl's head. In Slovakia that is the common tradition. I can't imagine water dumped over my head on an early April morning. BRRR!

I don't think this tradition will ever carry over to other countries, especially America, considering the women's rights issues today.