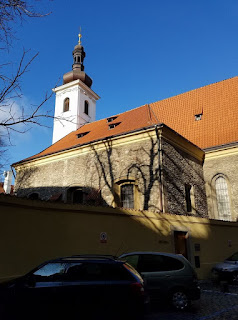 For the last year, I've been sharing pictures of majestic ancient churches in the area of Prague. I recently decided that I've never spoken about the church that my husband has been serving during our year in the Czech Republic - St. Michael the Archangel Lutheran Church. Of all the one hundred spires of Prague, our church is the only one that is Lutheran in the entire city.

St. Michael's was first built during the 1100s. Only two pillars  of the original structure are still in existence in the nave of our church. It has been owned by several different church bodies including the Catholic Church, the Benedictine monks, and  protestants. The German Lutherans purchased the church in the late 1700s. 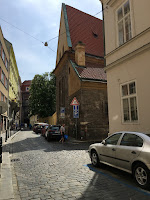 Today it is owned by the Evangelical Lutheran Church of Czech Republic. Every Sunday three Lutheran congregations with three different pastors worship in this church. The Slovaks have their service at 9:30. The English service is at 11:00. And at 6:00, the Czechs hold their service. 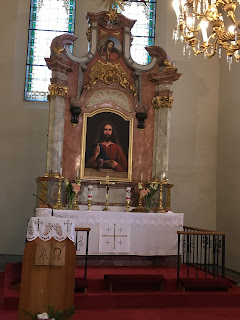 Located at the intersection of two old cobblestone streets, the church is tucked tightly into a neighborhood with apartment buildings on all sides. The streets, built in the Middle Ages, don't intersect at right angles (not a surprise). The outside stone walls of the church match the angle of the street, creating an asymmetrical shaped structure. 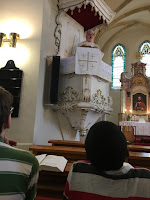 The inside of the church is much simpler than most churches we've seen, but parts of the altar are in the Rococo style with ornamentation.


The pulpit is located in the middle of the church because of the sound issue. It's much easier to hear the pastor preach when his voice is broadcast from there. 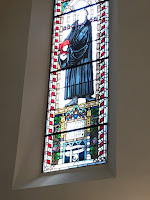 The church does contain a Luther window which must have been added  when the German Lutherans were owners. They also added the stained glass windows over the doors that have German writing in them. 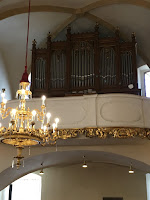 The organ in the balcony was added in the second half of the nineteenth century. Albert Einstein played on this organ in 1918. A plaque outside the church doors commemorates this event.


The English congregation today is rather small, made up mostly of missionary families. When we move to St. Petersburg, they are looking forward to receiving another missionary who will serve St. Michael for many years. Hopefully, there will be opportunity to reach out to other expats in the area during his time in Prague. 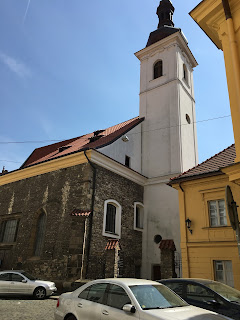 If you ever have the chance to visit Prague, take the time to find this one Lutheran church in all of Prague. Visitors are always welcome with open arms to our church services.