By connie cortright.com August 28, 2018
That was the first word we had to learn in Russian - and such a friendly way to say hello! Believe me, it wasn't the easiest introduction to our new language. Since I'm writing this blog about life in Russia, I thought you should have an introduction to the language here.

We had 3 weeks of Russian classes in July and now started working with a tutor twice a week for 2 hours. We need to pass a Russian test before Chuck can get his work permit, so we need to keep studying.

Russian is a hard language to learn, but since it's written in Cyrillic that makes it more difficult to figure things out. Many letters look the same but are pronounced completely different. For example the word "ресторан" means  restauran(t). The p's are really r's, c's are always s's, and н is really an n. And don't forger that - в is always a v sound and ш is the sh. It gets confusing. 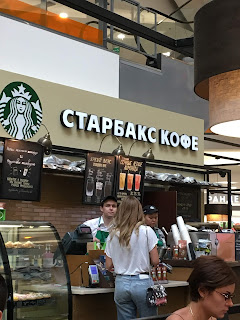 There's a reason the woman on the cover of our Russian book has her book over her head -- it's very confusing. And I haven't even touched on the topic of "verbs of motion". You don't want to know what those are. 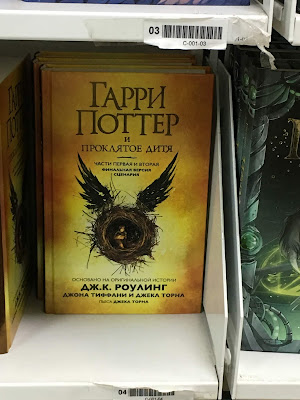 The funny thing is how typical English words look when written in Cyrillic. Coffee, anyone? Starbucks Coffee stores show up everywhere. How about your kid's favorite books about Harry Potter. ( Check out the way J.K. Rowling is spelled in Cyrillic) 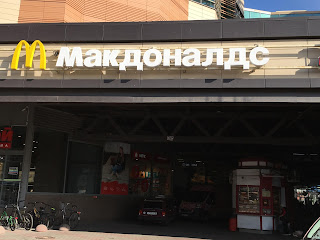 And of course, MacDonalds (Макдоналдс) and Burger King (бургер кинг) are ever-present here like in the States. Sometimes right next to each other.

Life can be interesting here just trying to read the advertisements and signs we see.