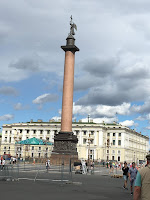 I thought that since I was in Russian class for 3 weeks, I better show off all the Russian I know, so I put the longest word we learned in my blog this week. That long word means a famous site for tourists to visit in a city. We took some time last week to visit some of St. Petersburg sites which I am sharing with you today. 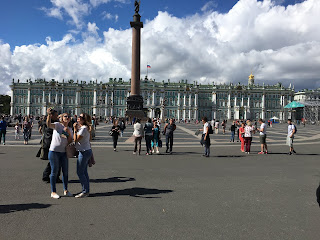 The picture on the left is the Alexander Column - the tallest of its kind in the world - built for the victory over Napoleon's France. It's named after the emperor who defeated the French, Alexander I. It's located in Palace Square next to the Winter Palace of Peter the Great. It's topped by an angel holding a cross. 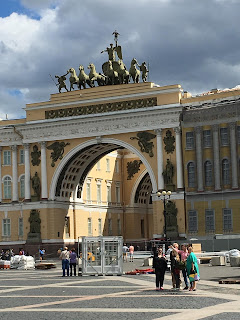 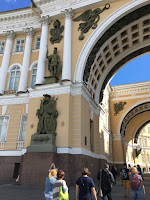 Across the square from the Alexander Column is the General Staff Building, built in the early 1800s, which used to hold the Finance Ministry and Foreign Ministry joined by a triumphal arch. The arch is decorated with sculptures also honoring the victory over Napoleon. 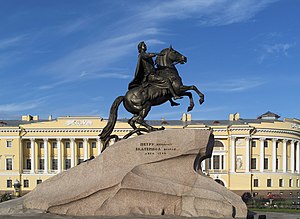 One of the main attractions in St. Petersburg is the statue of Peter the Great sitting on a horse - thus called the "bronze horseman." Peter the Great founded the city named after him in the late 1700s because he wanted Russia to have a port on the Gulf of Finland. 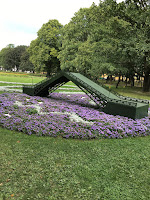 Catherine the Great dedicated the statue in 1782 to her predecessor, who she greatly admired. The 20 foot statue sits on a granite boulder known as Thunder Stone which was moved from Finland to its current location. 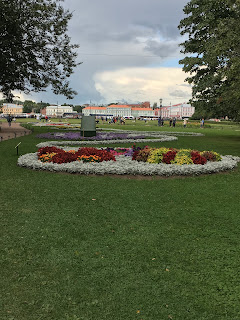 The bronze horseman stands in a beautiful park that stretches out in front of the Admiralty Building with a fountain in front of it.

There are many beautiful areas in St. Petersburg which I will share with you in the weeks ahead. Maybe I'll use some more Russian words, also.