By connie cortright.com September 11, 2018
Several weeks ago we took an excursion on a hydrofoil to a palace about ten miles southwest of St. Petersburg. On the shore of the Baltic Sea, Peterhof Palace was built by Peter the Great as a summer residence - a place to escape the heat of the city during the summer months. He planned the layout of the spacious gardens and numerous fountains in the early 1700s.


A visitor has to walk along a channel linking the ocean with the palace. Originally, the Sea Channel was built to access the palace by boat, but today it's part of the breath-taking view as you approach the palace.


Peter the Great built his summer home high on a bluff, planning the fountains that today grace the front of the building. The Grand Cascade, with its 64 fountains, open into the main fountain, where Samson battles the lion. In this fountain, designed by a Frenchman, water shoots from the lion's mouth twenty feet into the air.

This main fountain is set in the middle of the huge gardens surrounding the palace. Other parts of the garden also are decorated by beautiful fountains. We walked for several hours from one end of the gardens to the other and saw all these gorgeous fountains built in the 1700s. 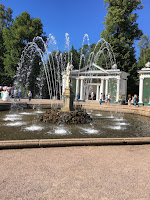 The Pyramid Fountain is built with 505 pipes of different sizes. The smaller the pipe, the higher the spray rises because of the greater pressure behind it. The pipes around the outside of the pyramid were wider and thus the water only rose a couple inches. It was very fascinating.

Also situated in the midst of the gardens, we saw the Hermitage Pavilion. Peter and some of his successors used this small building as a dining area outside of the palace. Surrounded by a tiny mote, the two-floor pavilion is only one room - a dining room. 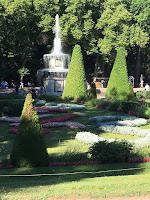 The table was set and guests arranged around the table. Then the table and guests were pulled up to the second floor by servants using a pulley system. There were no stairs in the building to keep the servants on the floor below. This was done because the Czars wanted to speak to their guests without the servants hearing any of the secrets they discussed. It seemed to be a lot of trouble to go through just so the servants didn't listen in.

It was a beautiful day to see a wondrous place.