St. Petersburg - "Venice of the North" 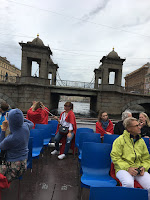 Before the weather turned too cold, we took the time to check out St. Petersburg by boat. Since this city was basically built on a bog by Peter the Great, much of it is now made up of islands connected by 342 bridges over the many canals and rivers. A terrific way to see the central city is by taking a boat excursion tour. 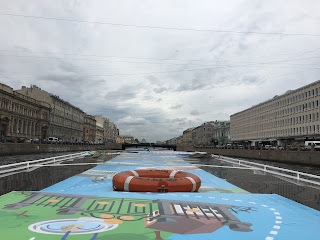 This was a unique view of the 18th and 19th century buildings that line the banks of the rivers and canals. The area, visited by many tourists during the summer, is known by the citizens of SP as the Central City. 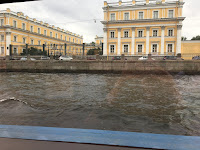 We passed many beautiful buildings and palaces. Currently, many of these buildings are occupied by universities and colleges. 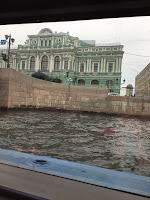 
As we rounded a corner into a smaller canal, we glimpsed the blue domes of the Trinity Cathedral. This beautiful church has been added to our "to visit" list.


A short distance down the canal we spotted the St. Nicholas and Epiphany Cathedral. It's bell tower greeted us as we passed by. 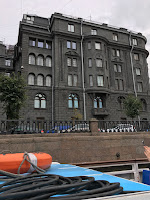 On the next corner, our guide explained to us what a "profit house" was and showed us the one pictured on the right. He said that since St. Petersburg was built on basically a swamp, land was very expensive. Therefore, the owners built apartment buildings with store space available on the first floor. They were known as "profit houses" because this was like owning gold to the landlord. This building was built in the 1800s, so it's brought a lot of profits to the owner for all these years. 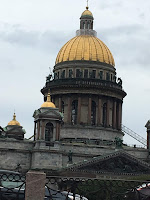 The last large church we passed was St. Isaacs Cathedral. That is also on our "to visit" list. It has a catwalk at the base of the dome that is said to have gorgeous views of the entire city. I'll have to see if I'm brave enough to climb up there. 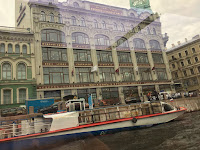 The picture on the left is the "Red Shop." It was the first shopping mall built in the new city of St. Petersburg. They named it the Red Shop - Магазин у краснаго моста - simply because it was painted red when it was first built. It's still called that today. 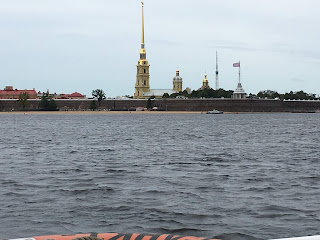 The tour then headed out into the large Neva River where we could see the Peter and Paul Fortress where SP first began - yet another of our places to visit. The large spike on the cathedral in the middle of the fort is the tallest point in the city.


We saw many more magnificent palaces and museums on our tour, but I don't have the space to show you any more. You'll just have to plan a trip here to see them all for yourselves. It will certainly take us a long time to finish our list of places to visit.