Russian Architecture in the Heart of St. Petersburg

By connie cortright.com March 05, 2019
Most of the great buildings in St. Petersburg are built in the European style, looking similar to Prague. The building in our fair city displaying the best Russian architecture is the Church of the Savior on Spilled Blood. Built in the medieval Russian style with "onion domes" on the spires, this church strongly resembles famous Moscow churches.


The name of the church is closely tied to its history. The story goes back to 1881. Tsar Alexander II was riding along the canal in a carriage when an anarchist threw a bomb at him in an attempted assassination. The Tsar was so upset with the bomber that he exited his carriage to reprimand him.

A second anarchist, taking advantage of the situation, threw another bomb. Tsar Alexander II was severely injured and later died at the Winter Palace. His son Tsar Alexander III vowed to build a church on the very street where his father's blood was spilled. Today the Church of the Savior on Spilled Blood straddles this spot. 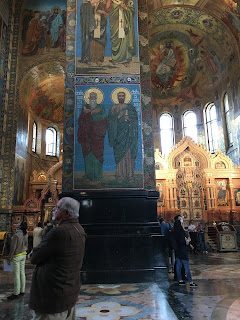 Last fall, we visited this orthodox church, which is now a national museum. The church is as beautiful inside as it is outside.


The interior  walls are covered entirely in pictures made of mosaic tiles. They portray scenes from Biblical history including the life of Jesus and the twelve Apostles. 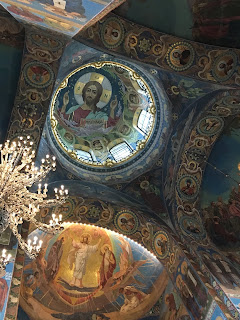 The arched ceiling continues the life of Jesus, spreading into the domes. It is truly beautiful to see.

Everywhere one looks, the story of the Bible is loudly proclaimed, entirely made of mosaics.


In the back of the church, an elaborate shrine to Tsar Alexander II was built in the spot where he was assassinated. The covered structure is decorated with precious gems. The floor of the shrine is open down to the ground, exposing the cobblestone street where the assassination actually took place.

When you come to St. Petersburg, this should be on your "must see" list.