By connie cortright.com December 17, 2019
One of the most beautiful cathedrals in St. Petersburg was built for a different purpose than it is used now. Smolny Cathedral, near the banks of the Neva River, was built by Elizabeth, the daughter of Peter the Great, as part of a convent that she was going to live in.


When Elizabeth found out that she was disallowed for succession to her father's throne, she decided to build a convent to live out her life with other nuns. However, when her nephew was overthrown in a coup in 1741, she gave up the monastic idea and ascended to the throne as Empress of Russia.

The large cathedral in the center of the convent wasn't finished until after Elizabeth's death in 1764. The buildings around the cathedral were used to house a girls' school instead of a convent after the Empress no longer needed it for herself. Currently, the buildings are part of the Saint Petersburg State University. 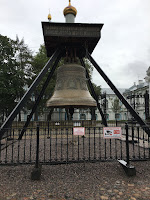 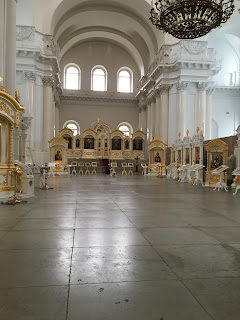 During Soviet rule, the cathedral sat empty and was allowed to decay. It has been restored, and in 2016 rededicated for Orthodox worship once again. The big bell in the front of the church was donated by other cities in Russia on the occasion of the rededication.


The inside of the cathedral was much simpler than most other churches that I have seen in the city. The white walls stood out in contrast to the mosaics or paintings that covered the walls in other cathedrals. 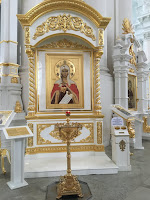 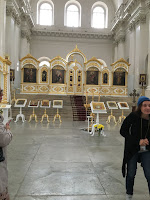 However, gold icons and pictures added an aura to the space that brought a beauty all of its own.


The emptiness of an Orthodox Cathedral always strikes me as peculiar. I'm so used to seeing a church filled with pews that the starkness makes me think something is missing in Orthodox settings.

The true beauty of Smolny Cathedral is the outside of the building. The bright blue, contrasting with the white trimming, is very striking. Maybe because it's my favorite color!