By connie cortright.com February 25, 2020
The president of the country of Latvia lives about three blocks from our house in a castle that doesn't look anything like the US White House. His house is called Riga Castle or Rīgas pils in Latvian. The castle is located on Pils Iela - Castle Street which runs past our street.

The Riga Castle is a bit older than the White House in Washington. In 1515, the current castle was finished being built. It had another part added to it in 1641. The previous castle was burned down in the late 1400s. The castle today also holds a museum of Latvian history. 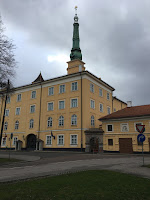 Riga has been governed by several countries during these centuries: including the Lithuanians, Poles, Swedes, Russians and Latvians while this castle stood. It has seen many changes as the rulers changed from one country to the next.


The president of Latvia has lived in the castle since 1922. Of course, during the Soviet era, the government administration was located here, but there was no president then. When independence returned to Latvia in 1991, the president then moved back into the palace.


In June 2013, the castle was partially ruined by a fire. Several sections of the roof were burned including the areas which held the museum. Thankfully, the residence of the president didn't receive any damage during the blaze. Today the burned-out areas are under reconstruction, not allowing any visitors inside. The administration of the government is still being conducted in the parts of the castle that were not damaged.

On the right, you can see a section of the outer wall that was not finished so people can see the many layers of stones that have been added through the years to the construction. It's amazing that these walls have been standing for more than 500 years.

Because this is the palace of the president, the Latvian army has guards standing outside the castle main door for security.

I recently witnessed the changing of the guard. It's not often you see men stand statue-still for hours or march with precise movements.

But we see this every day on our way to our bus stop. Not many people can say that!