By connie cortright.com February 18, 2020
I've had a couple people ask me where in the world are you now? So I thought I'd get down to basics this week and show you a bit about the city of Riga.


Riga is the capital of the country of Latvia - one of the three Baltic countries. It's in between the other two Baltic States of Estonia and Lithuania, all of which border Russia.

To the west of Latvia is the Baltic Sea which is located between the Baltic States, Sweden and Finland. The Daugava River (which is a block from our flat) empties into the Gulf of Riga and out into the Baltic Sea. As a result, Riga's port is very important to the economy of the country of Latvia.


The history of Riga goes back to the early Middle Ages. The Vikings traded with the people who lived along the Daugava River, establishing the first village on the site of Riga today.


When we first visited Riga, we were amazed by the number of large, old churches that we saw. Notice all of the steeples in the top picture. Riga was one of the first cities to adopt the new Lutheran faith in 1522 shortly after Martin Luther left the Catholic Church. Two of the three tallest steeples in the picture above are Lutheran churches. Lutheranism is very strong in the entire country of Latvia.

We live in the old section of Riga. It's the part that was included in the original walled city back in the 16th Century. Because of that, we walk on cobblestones, dating back who knows how far. Paved entirely in cobblestones, it's fun to explore the nooks and crannies of this old part of town. 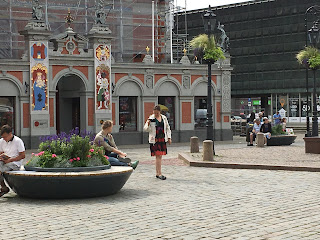 Today Old Riga is a very popular tourist spot for anyone interested in history. It's a great place to visit to see historical buildings. But Riga is much larger than the old city center.


A modern city has grown up around Old Riga. We haven't explored much of that part of the city yet. We did find the IKEA store, however.

We'll have a chance to explore more of the city when it warms up here. We have lots of time for that later.