By connie cortright.com April 29, 2020
Most American Lutherans think that the terms cathedral and Lutheran don't go together, however, in European countries it isn't unusual to find them describing a church in a city. Holy Trinity Lutheran Church in the city of Liepaja is an example of this.


Liepaja is a large town in the western coast of Latvia, close to the Baltic Sea. It's a couple hours drive from Riga. Last fall, Bishop Hanss Martins Jensons drove us to this city and gave us a tour of this cathedral. His office is based in Liepaja, so Holy Trinity has now become a cathedral because this is his church. 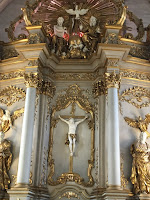 The outside of the church, constructed in 1758 in the late Baroque era, is currently under reconstruction, so I don't have any pictures of it, but the inside was very beautiful. The golden, intricate decorations in the chancel, however, attest to the fact that it's decorated in the Rococo style.

The organ of Holy Trinity is the world's largest mechanical organ with 7000 pipes. It was rebuilt to its current size in 1885. Unfortunately, I didn't have the opportunity to hear this fabulous organ on the day we toured the church. Maybe some day.

The pulpit follows the style of the Rococo era with its golden ornamentation. As usual in Europe, the pulpit sits well into the middle of the cathedral.

The church even includes a "Duke's box" made in the 1860's to honor the Duke of Courland. I have no idea who sits in the special room today.

By far the most interesting thing to me was the baptismal font. It depicts an angel dressed in gold, kneeling with the baptismal bowl in his hands. It was sculpted in Italy. Of all the churches we have visited in Europe, that was the most unique thing that I've ever seen.

Information taken from Trinity - The Cathedral and its Organ