By connie cortright.com April 21, 2020
Many of you probably have heard the story "The Town Musicians of Bremen" or maybe remember something about a donkey, dog, cat, and rooster standing on top of one another. Riga has a statue depicting this story right next to St. Peter Lutheran Church.


When I first saw it, I remembered the fairy tale from my childhood about these four animals heading out from their farm because they felt old and useless. After conferring with each other, they decide to go to the town of Bremen to become musicians and live in freedom.

While they were walking on the road to the town, they spotted a cottage nearby. When they looked through the window, they saw robbers, counting stolen money. The four friends decided to chase the robbers away, so the dog climbed on the donkey's back, the cat climbed on the dog's back, and the rooster stood on the cat's back. The four animals then proceeded to make so much noise that the robbers ran away, scared to death. The four then decided to move into the abandoned cottage and live out their lives.


The city of Bremen in Germany built a statue to the honor of this story in 1953. Bremen then became the sister city of Riga and donated a similar statue to Riga in 1990. The statue in Riga has a political message to it, however, The statue was dedicated one year before Latvia received freedom from the USSR. The artist of the sculpture has the four friends peering through the Iron Curtain instead of looking through a window like the original story states. The Iron Curtain is depicted by the metal shield surrounding the friends. They are trying to see what life is like on the other side of the communist "wall." 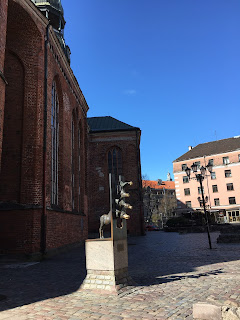 What I find as odd is the location of the statue. It is literally built in the shadow of the huge St. Peter's Church. It seems to be so incongruous that the statue depicting a fairy tale is built in such close proximity of a church. I have no idea why this particular square was chosen for the statue, but there it is.


If you're ever in Riga, you may have to walk all the way around St. Peter's to find the statue. It doesn't seem to be in a very easily spotted location.