The House of the Brotherhood of Blackheads

One of the most unique buildings in Riga is the one pictured on the left. It was built in 1334 in the Riga Town Square by the Brotherhood of Blackheads. This guild was founded as a military organization of unmarried merchants and foreigners (mostly Germans) who fought to protect their investments in Riga's early days. These Christian men had to defend themselves against the indigenous population who wanted to get rid of the foreigners who had settled in their territory.

Over the years, the Brotherhood of Blackheads slowly changed into a more commercial society with meetings that pertained to the trade and social standing in the community. When the members of the Brotherhood were married, they would then join the Great Guild in the city.

The facade of the House of Blackheads is very interesting with sculptures of Neptune, Mercury, Unity and Peace adorning the main portion of the building. The roof line is in a stepped pattern as it rises to the peak.

In 1522, the main doorway was decorated with two stone figures -  the Virgin Mary on the one side and Saint Mauritius on the other side. The black Egyptian saint is the patron saint of the Brotherhood. He may be the reason they chose the name of the Brotherhood of Blackheads for their organization.

The upper level of the building holds a Great Hall where balls, concerts, or theater productions were held for famous and important people such as presidents, kings, or queens. Many cultural events were seen here before June 1941. That month, the building was destroyed by the Germans during WWII. The Soviets leveled the ruins in 1948. 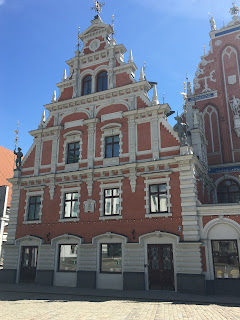 If only this pandemic hadn't closed down all city museums and historical buildings. I would have loved to tour this piece of history.

Information taken from "Riga, Journey through the Centuries."