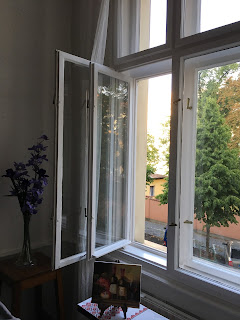 It's been hot here lately. I guess that's no surprise. After all, it's August. The reality of no air conditioners is finally hitting home. When temperatures get to 93 degrees during the day and cool off to 70 degrees at night, we long for an air conditioner.

But we are faced with the fact that our only air conditioners are the windows we have to open, or shut, at will. As you can see in the picture, we have the "old fashioned" kind of windows in our new apartment. It's actually two windows that need to be opened to get any fresh air to come in.

Many European windows have the kind that either open on the side, or tilt in, leaving a small space open on the top. Our building hasn't been upgraded to that type yet. But of course, we have no screens on any of our windows (to make things more interesting). 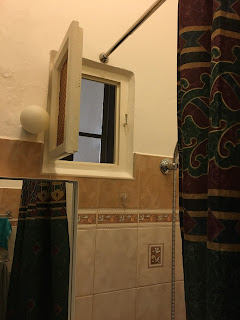 When the thermometer is reading 85 or more outside, it's really not advisable to open the windows. So during the days when the temperature soars, we leave the windows closed until it starts to cool off at night.

The last couple days our apartment has gotten hot, 80 to 82 degrees during the days when the windows are shut. Thank goodness we have a fan. I think it reached 84 degrees yesterday. Needless to say clothes are kept to a minimum on days like that.

But when the evening comes, we thankfully throw open the windows and let the cool air (if there is any) flow through our flat. Unfortunately, we have only east facing windows. Not much chance for cross-ventilation. Ah, but the people who built our building placed a way to get cross-ventilation, pulling in any cool air available. 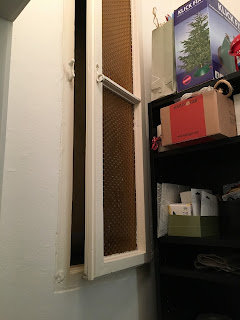 In our bathroom and storage area (far away from an outside wall), we have windows that open to nothing. Behind those "windows" there are empty shafts. I know that other flats have access to these shafts, also. At night, we see light glowing from a different apartment in the space. We've also heard our neighbor's baby crying through our open vent.

When these vents are closed, it just looks like a colored-glass window. But the person who rented our apartment before us told us the secret of these vents. When both the outside windows and the vents are opened, a lovely breeze is pulled through the flat. Sometimes.


I am assuming that the shaft goes all the way through the five-storied building to the roof and pulls air into the windows, venting it out the roof. On days when the inside temperature is over 80 degrees, we'll do anything to try to cool the house down. 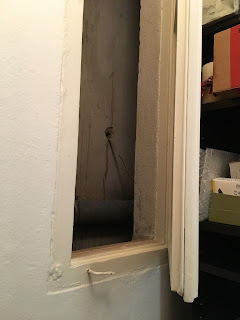 The previous renter admitted to us that she was too uncomfortable to open any of these inner flat vents until this summer when the heat descended on her. I sometimes cringe myself when I open these vents.

What creepy crawly thing could be hiding in the inner shaft? What rancid smell will attack us unawares? (We've smelled some of those smells on days when the air reverses and pours into our space from the empty shaft.)

But, when you're hot enough and would do anything to cool off, the thought of insects or other crawly things is put out of your mind and the vent windows are opened.

It doesn't take the place of an air conditioner, but it's the best that Prague has to offer. Thankfully, the really hot days don't last long. By next week, it will probably be nice and cool.