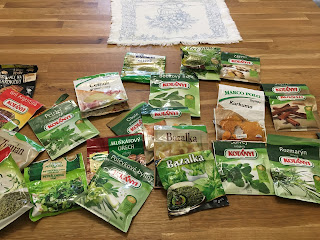 Now that we are settled in our apartment and things are falling into a routine here in Prague, I'm starting to get braver about cooking in my kitchen. I haven't quite figured out the spices yet, however. 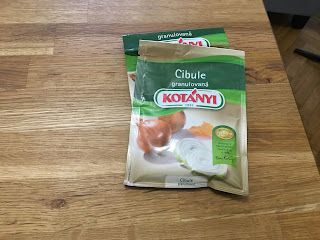 First of all the spices are purchased in packets (i.e. taco mix) instead of bottles like we're familiar with in the states. I have not, as yet, figured out how to organize these packets into some semblance of order in my drawer. They all lay together in a row, but finding the one I want is time consuming.

Reading the labels, which are in the Czech language, is also a challenge. The pictures on the packages are a huge help. If the package has a picture of an onion on it, the obvious conclusion is that I have onion powder in my hand.

One of the missionary wives who was here in the early 1990s, shortly after CZ freedom, said that none of the labels had pictures - only Czech words. I can't imagine shopping without the pictures on the packages. I guess she carried a dictionary with her everywhere she went. 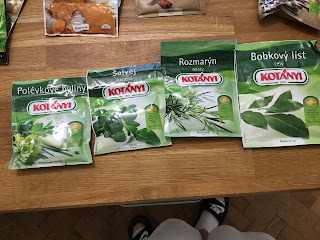 What happens when the packages all have the same green leafy herbs on the pictures? Now there's nothing left to do but pull out my Google translator on my phone to try to figure out what I'm buying. Rosemary isn't hard to figure out - Rozmaryn. Oregano is also oregano in CZ, so that's a give-away. Bobkovy list is bay leaves. Salvej is sage. And petrel is parsley. The one named polevkove biliny was a bit of a mystery. My phone wanted to translate it either frozen herbs or soup herbs. I'm concluding that it's a mix of herbs that I'll probably put in soup sometime. 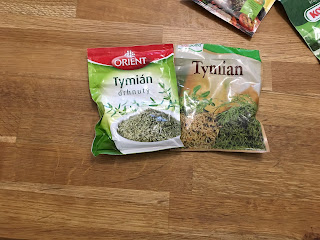 Then there's there problem of duplication. Since the packets are all stacked together how can I know which ones I have. I inherited many packets from the previous renter of our flat along with the packets I've purchased since moving here. Together I've created a mess in my drawer. Here are two packets of the same spice Tymian which is thyme. Obviously, the second package was purchased before the first one was used up so now there are two.

I'll have to take time to figure them all out someday soon and get my spices organized in an easy to figure out method. Most likely, alphabetical order. In the mean time, I'll have to paw through all the packets to find the one I'm looking for. I'm not complaining, just wanted you to get an idea of life in the kitchen over here.