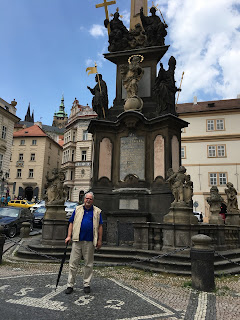 Since we took a stroll along the cobbled streets of Old Town last week, I thought that you might be interested in knowing about cobblestones in newer parts of town. To be sure, most streets and roads are not cobbled at all today. They are paved like in the US.

However, in the tourist or higher rent areas, roads are still cobbled today - many of them in a decorative pattern. As you can see from the picture of my husband standing in front of a statue, the people who laid the cobbles wanted you to know that it was in 1882.

The question that crossed my mind was how, or who cobbled these streets to look so beautiful. A couple weeks ago when I was walking to our friends house, I received the answer to both questions. So, even if this cobbled street was laid in 1882, the same process is still used today by very hard working Czechs. 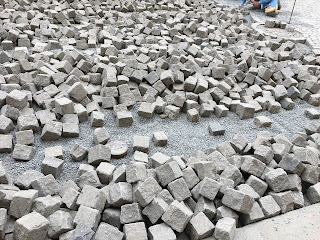 As I walked down the street, I saw that it was filled with cobbles lying about. It was obvious that the cobble laying process was going on. 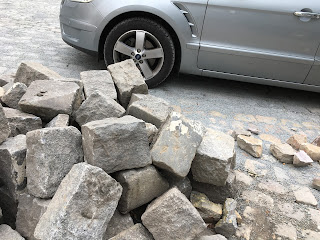 I wanted to show you that these are not just small square stones, so I took a picture of a heap of them near a car. The perspective may be a bit off in the picture on the right, but I think you can get the idea that these are large stones that the men handle for eight hours a day. 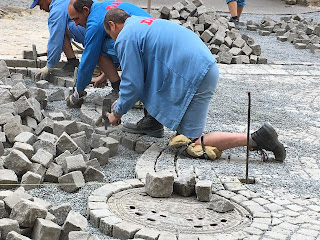 Men, on their hands and padded knees, laid the larger cobbles out one by one on a bed of tiny pebbles, pounding them into place. I was amazed. You can see the rounded pattern of the cobbles that they are creating.

In the background, someone else worked on laying the sidewalk cobbles. Those stones were much smaller. Maybe the size of your palm. 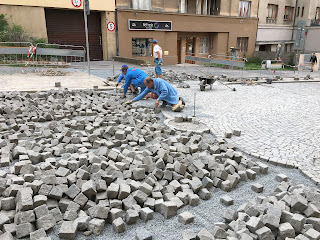 This is one of the most mind-boggling things that I've seen since we moved to Prague. The fact that these men do this hard back-breaking (not to mention knee-breaking) work day after day. You maybe can't tell from the pictures, but these were not young college-age men doing this work either. I can't imagine anyone that age in the US doing this job. Period.

It's no wonder that road construction of cobblestone streets takes a long time. I think they deserve a vacation after watching them for only five minutes.