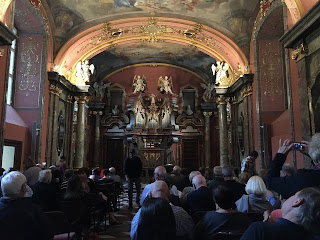 Last month, we had the honor of hearing a fantastic concert in a marvelous setting - Mirror Chapel.


The Mirror Chapel, built in 1725, is part of the Prague Klementinum complex. The Klementinum, at one time a Jesuit university, was started in the 1500s. Today it is the site of the Czech National Library. 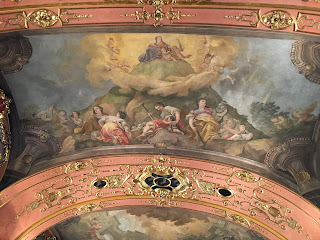 The former chapel, so named because of all the mirrors on the walls and ceiling, is now the location of nightly chamber music concerts. It has two organs - one in the chancel area and one in the balcony.


The chapel is decorated in the baroque style with frescoes adorning the ceiling panels and walls. Gold statues and ornamentation add to the beauty of the space. 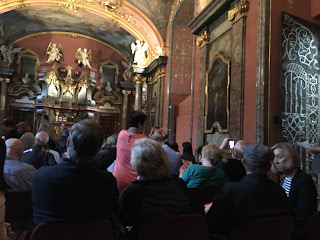 The Mirror Chapel, a national historic landmark, has a claim to fame because Wolfgang Amadeus Mozart played one of the organs.

The evening that we heard the concert, the chamber orchestra played Mozart's pieces "A Little Night Music", "Allelulia from Exsultate Jubilate", and "Queen of the Night". The musicians also played compositions by Pachelbel, Dvorak, and Smetana. 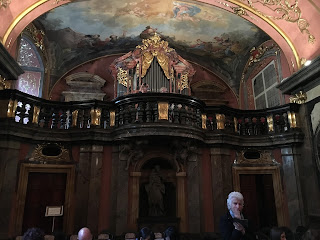 The Vivaldi Four Seasons concert was very special to us because Michelle Hradecka played the organ that evening. She played J. S. Bach's "Toccata and Fugue in D Minor". Since she's the organist from our church, it was enjoyable to be able to hear her extraordinary talent in a concert setting.

Overall, the night was something that will be remembered for a long time to come.