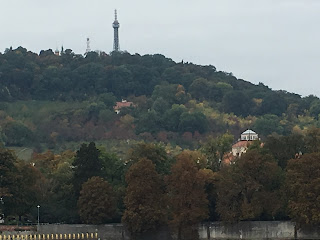 We've seen this tower rising on a ridge south of us in Prague. It's called the Petrin Tower. After waiting for the summer crowds to depart, we finally climbed up to check it out last weekend.

Petrin Tower, often referred to as the "Little Eiffel Tower", was built when members of the Club of Czech Tourists visited Paris in the 1889 world exposition. The Eiffel Tower so inspired them, that they returned to Prague, raised money, and completed Petrin Tower in 1891. It was used as an observation and, later, a television transmission tower. 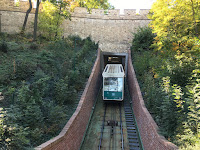 Today this is a tourist attraction to the many visitors to Prague and newcomers such as us. Most tourists access the tower by using the tram that climbs the steep hillside.

However, on our walk in the beautiful September weather, we managed to find paths that took us to the top of the ridge to see this site. 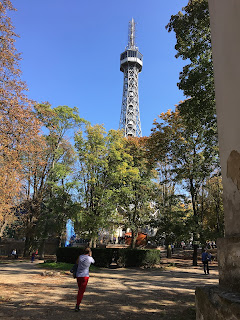 By the time we reached the top of the ridge, we were huffing and puffing. Watching the people ascending and descending the stairs to the observation deck near the top, we decided unanimously not to climb up the 299 steps. Enough climbing for one day. At least, we could now check this item off our bucket list. 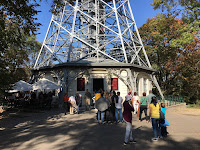 We were surprised to see that the base of the tower was not open like the Eiffel Tower. Instead it was enclosed with an exposition area and gift shop. 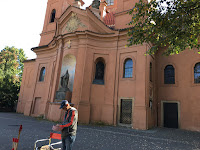 Dating back to the 1700s, the St. Lawrence Church was built on this hilltop. We had no idea that this church would greet us when we climbed the ridge. The fourteen statues of the Ways of the Cross were scattered throughout the area where the tower stood and tourists walked. This was a sacred hill long before the duplicated Parisian tower was even a thought in anyone's mind. 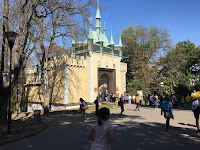 Built directly across from St. Lawrence, this castle-like building stood with lines of people waiting to gain entrance. We used our Google Translate to find out that this was a maze. This Petrin Mirror Maze is a major attraction, especially for families. The interior, filled with mirrors, forms a labyrinth ending in a "hall of laughter", so I'm told.

These two structures, so close together, seemed incongruous to us. So often in Prague we see the sacred and the "silly" side by side, but no one seems interested in the sacred. 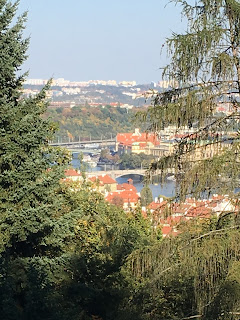 After a thorough inspection, we started down the hill. Of course, after all the walking and climbing, we had to sit and drink a beer at a conveniently placed Hospoda on the way down. The view of Prague from there was fantastic, rewarding us after our long walk. All in all, a good day.