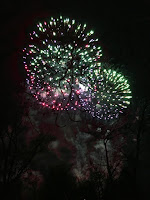 Happy New Year! Prague certainly knows how to usher in a new year. It started with firecrackers and bangs about 7:00 PM on the 31st and didn't end until New Year's Day about 7:00 PM.

We were warned before last weekend that New Year's Eve is crazy in Prague. They told us not to go downtown, or into large popular squares. Prague residents take the celebrating into their own hands and somehow purchase firecrackers and fireworks that are set off by individuals, including the kind that fly into the air and burst into beautiful colors.

Taking the warnings seriously, we stayed at home and invited some friends to join us. The celebrating started way before midnight with the bangs and pops heard from our window early in the evening. It continued almost constantly until half an hour past midnight. My husband commented several times that it sounded like we were in a war zone.

The next day, the only evidence of the celebrating was an empty fireworks hulk lying near a tree as I walked by.  I wondered how many trips to the emergency room were made the evening before because of carelessness with the devices.

We couldn't see much out of our windows. We live across the street from a police compound, so that may explain the lack of anything interesting near our flat.

At midnight, the booming grew in volume and frequency. It seemed that every neighborhood or area in the city was shooting off fireworks. We even saw fireworks shot off from the American ambassador's residence which is half a block south of us.

Our friends told us that last year they went to a park across the street from their house. At midnight on New Year's Eve, they were surrounded by people lighting fireworks that flew past their ankles. They were actually afraid they'd be injured in the mayhem. That's why they agreed to come to our house this year. 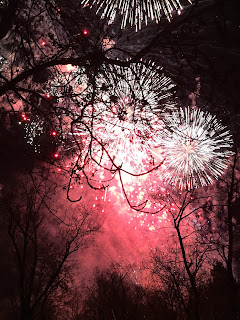 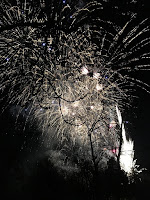 However, officially, Prague celebrates the New Year the next day. January 1st at 6 PM they stage a city fireworks display off the edge of the precipice on our side of the Vlatava River. I couldn't pass up this opportunity since it was within walking distance. We trekked to the park and found a great spot to stand.


We could hear a crowd of people somewhere below us along the riverbank. We also heard a voice - of course speaking in Czech - announcing things over a speaker. Music played from these same speakers as the fireworks started. It was quite magnificent. 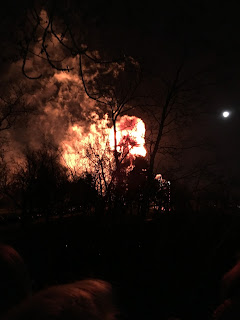 A fireball erupted as one of the fireworks was shot off. It was quite dramatic seeing the fireball rise into the sky. It didn't last long, so I'm sure they had equipment to control this accident very quickly. A loud gasp rose up through the crowd as we watched this happen, however. 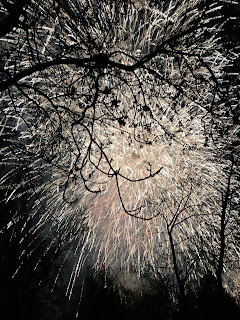 Our location in the park was definitely the way to watch fireworks in Prague. I'm just glad the weather cooperated. We stood in a 45 degree crystal clear evening.

Although it lasted only ten minutes, it was worth it. The fireworks display was well done, but it's not the same as watching on the 4th of July on a lovely summer evening.

If you're scheduling a trip to Prague for the holidays next year, make sure you go to Letna Park for the New Year's Day fireworks. What a way to celebrate the New Year.