By connie cortright.com January 16, 2018
As promised, today's post will be a glimpse of the sights we saw in Vienna last week. Vienna was a wonderful place to visit, even though it rained the first day we were there. We did manage to taste the original Sacher Torte at the Sacher Hotel, however.

We toured the majestic cathedral in the city center. St. Stephan's was started in the 1300s. It became a cathedral in 1722 when the pope allowed this church to become an archbishopric. It sustained some damage during WWII, but was rebuilt shortly after the war was over.

To avoid the rain, we spent the morning viewing the Peter Paul Rubens collection at the art museum.

Maria-Theresa stood watch outside of the art museum with her four guards on horses protecting her. She was the only female ruler of the Habsburg dynasty, reigning from 1740-1780.


In the afternoon, we visited the Schonbrunn Palace, the summer home of the Habsburgs.
Located about three miles south of the winter palace, it's hard to believe that this humongous structure was built for the royal family and the fifteen hundred people that served them. It's so close to the city that today the summer palace is located inside Vienna city limits. 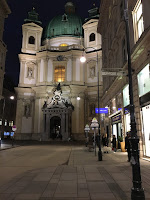 We heard an organ concert at St. Peter's Church. The ornate baroque interior was very impressive to see. 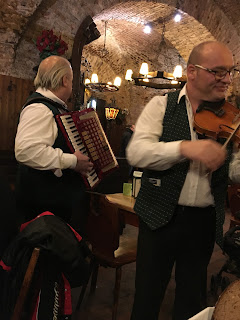 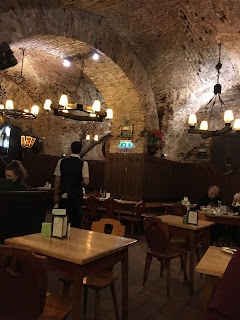 The last evening we had dinner at the Zwolf-Apostelkeller restaurant. In this historic (built by 1339) underground wine cellar, we had a Viennese dinner with sausages, pork, sauerkraut, dumplings, and all the trimmings. 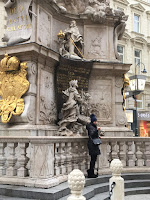 We were serenaded with "The Blue Danube Waltz" by Johann Strauss. What a way to end our stay in this city.

This postcard can't do it justice to show off the splendor in Vienna. You'll just have to go and check it our for yourselves.