The Babe on the Bill 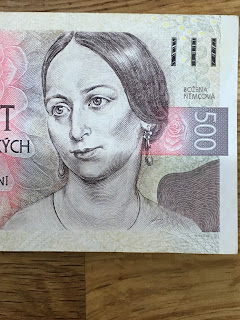 March 8 is known as International Women's Day here. The holiday is equivalent to Mother's Day in the US, but was instigated during the Communist era for Russia and Eastern European countries. I went on a walking tour of Prague that day to learn a bit more about the history of the Czech Republic's famous women. One of these women now appear on their money - 500 korunas. Her name is Bozena Nemcova.

Since she's on one of their bills, one would think that she was famous for something during her lifetime. That is far from the case, however. She died penniless at the age of 42 from a terminal disease.

She lived from 1820 - 1862 while Prague was part of the Austrian Empire. At that time, the land around Prague was known as Bohemia, and the common language was German. The Czech language had almost entirely disappeared during the 18th Century because the Austrians demanded the use of German in their empire.

Earlier in the 19th Century, the Czech language was rediscovered and started to spread first in universities and later in the schools where younger children learned it. This era is known as the Czech National Revival movement. As a writer, Nemcova was interested in promoting the language of her heritage. Her interest was telling children's stories in this rediscovered language.

She and her husband Joseph Nemec had four children, which she raised by herself after she divorced him. Since she had no husband, she had no steady income. She published her short stories, but didn't see enough proceeds to keep food on the table for her and her family.

She had the dream of writing a book of children's fairy tales in the Czech language. She tried to find backers to help support her while she was working on the task. All of the businessmen of the era thought that publishing fairy tales for children was preposterous and a waste of money. Bozena managed to finish compiling the folk stories and fairy tales before her death without anyone's financial help.

The sad end of this story is that the Czechs finally understood the importance of her compilation after she died. The people of Bohemia held a huge funeral in her honor, spending money that would have kept her alive if they'd given it to her before her death. They also placed a statue in her honor in a park on Slovansky Island in Prague.

Her most famous work "Babicka" - "The Grandmother" in English - is considered a classic for Czech literature. It explores life in a rural Bohemian village. She is also known today for her collection of fairy tales. I found that it was even available in German on the Amazon.de website over here.

I'm glad she's honored for her accomplishments now, but it would have been nice if she'd known how much she's appreciated today.