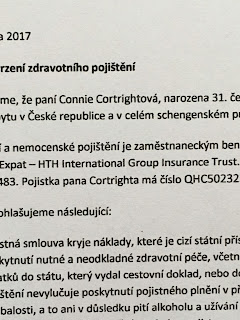 How do you like my new name? Did you see it in the document on the left? Connie Cortrightova.

I didn't know I'd have a new name when I moved to the Czech Republic. According to tradition, all females have the suffix "ova" added to their last name. It quite literally means "belonging to", as in belonging to a father or husband. Not quite politically correct, according to feminists in the US.

What do you think Hillary Clintonova would think of it? How about Meryl Streepova or Julia Robertsova?

I hear that things may change - even in the CZ - in the near future with the more modern approach to life, but who knows how long the government will take to make a pronouncement on this topic.

This long held tradition does cause some problems for women or girls born here. I've heard of several cases where confusion caused chaos because of this.

In another case, a US citizen delivered a baby in Prague. She told us before the baby was born that she was a bit worried what would happen if it was a girl. Her birth certificate would have "ova" at the end of her name. How would they deal with that when they returned to the US?

I know that she did have a baby girl, and they are moving back to the US at the end of March. However, I don't know what happened with the birth certificate problem. Hopefully, they persuaded the hospital not to add the "ova" to her last name.

Whoever would have thought that the traditions of a foreign country could have such lasting effects on your life if you are an expat for a year. I can't wait to find out what will happen when we move to St. Petersburg in June. What Russian traditions await us there?