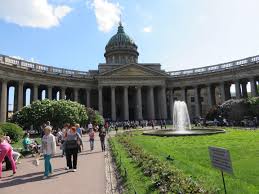 Last summer we took the time to visit one of St. Petersburg's famous cathedrals. This impressive building is the Kazan Cathedral. It serves as the "mother cathedral" of the Russian Orthodox Church in St. Petersburg.


Built in the early 1800s, the church is modeled after St. Peter's Basilica in Rome with two wings spreading north and south of the main cathedral. At the time it was constructed, the Russian Orthodox Church strongly disapproved of the idea that their cathedral would be built in the shape of the Catholic cathedral in Rome, but the Czar's courtiers applauded the design since it resembled a European structure. 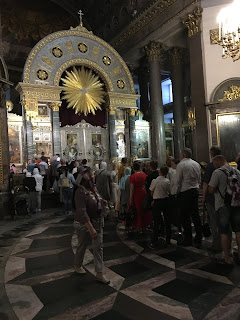 The cathedral was dedicated to "Our Lady of Kazan" the most venerated icon in Russia. When we visited the cathedral, the line leading up to the icon snaked around the interior of the church.


We watched the people inch toward the icon. As their turn arrived, they climbed the one step to reach the icon and then would stop and pray before kissing the icon. I saw one mother hold up her little one to see the icon. 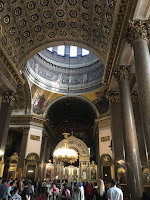 The vaulted ceilings of the cathedral pointed toward the center where a dome reached for the sky. It was very beautiful to behold.


I had never been in an Orthodox church before so I was surprised by the emptiness of the building. The usual pews were missing along with the always present altar. 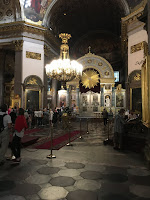 My husband informed me that the altar was hidden behind the shiny ornamented screen in front of the church. When a service is being held, doors open up to show the altar hidden within. 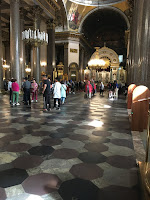 He said that they don't have liturgical services such as ours, so there's no reason to have pews. The people come and go during worship as they want and most don't stay long enough to bother sitting down. 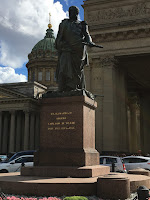 Near the doors of the cathedral, two statues rise up to greet people. The one pictured on the left is General Mikhail Kutuzov. When the general went into battle in 1812 again Napoleon, he asked "Our Lady of Kazan" for help to overcome the French army. After their victory, the church is known as a memorial to the victory of the Russians in this war. Kutuzov was interred in the church in 1813. 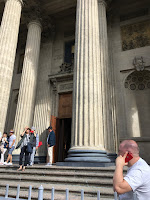 This massive structure is located at one of the busiest corners in St. Petersburg. We see it at least once a week when we are downtown. When one thinks of the history behind this building and other surrounding it, one has to say this city is amazing. The cathedral is one of several that are located here along with so many other palaces and museums. Pretty impressive.