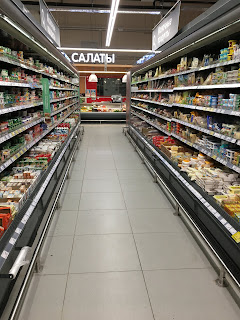 We've been in St. Petersburg now for four months. I'm getting used to shopping in our local grocery store which in many ways is like grocery shopping in the States. The stores close to my flat are rather large and very bright, just like back home. But there are several differences that are at times hard to get used to.


Besides everything labeled in Cyrillic, the first thing I noticed was the way mayonnaise was sold. I looked on all the shelves for jars of mayo and finally had to ask someone where it was. Of course, in the refrigerated area. I finally found the huge section of bags of mayo. Mayonnaise is used all the time here for every imaginary salad you can think of, so I guess it's not too surprising that so many different kinds are sold.


Most of the foods that I use are available for purchase, maybe just not in the same form. I searched for hours for vanilla to bake some brownies before asking my friend who's been here two years. She told me to look for a packet, not a bottle. The packet also includes сахар, which is sugar. So, how much vanilla should I add to a US recipe and how much less sugar since the vanilla includes the sweetener. Good questions which I don't know how to answer. That's one thing on my list to bring back from my home visit.

Other things are sold in different packaging. Ice cream cones are sold with the the ice cream already in it. I've tasted one. That's all I needed. The cone is so soggy that purchasing one wasn't worth it. 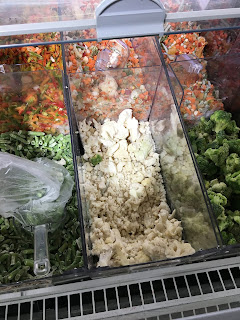 Some things are sold in no packaging at all. The frozen vegetables are in large bins, ready for you to scoop into your bag. You get to take home as much as you want. I can't imagine selling veggies like this in the US. It would never get past the inspection process. What else are you taking home in your bag of cauliflower, broccoli or beans? Somehow, I can't bring myself to purchase them this way. I buy bags of frozen beans.


The produce department has lots of choices in it, but much of the fruits and vegetables aren't worth their price. Most of the produce has to be imported, which makes the cost go up. Understandable, when you think about the length of the growing season here. 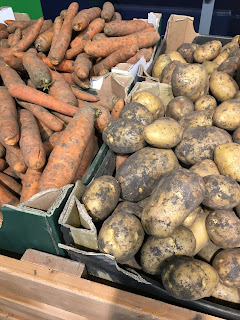 However, many fruits look like they've been shipped from around the world. They cost more and look like the left-overs from a US grocery store. I guess I'm picky. Bananas and apples are usually safe to purchase. Salad makings are also expensive, but I overlook that because we can't live without eating salads for dinner.

Corn on the cob is sold in the produce section here, but I've heard on good authority that it's really field corn. I doubt it not since it's dented most of the time when I see it. I saw a cob once still in the husk, brown and crispy. It reminded me of ripe corn that I used to husk when I was a kid helping my dad on the farm. I can't imagine how anyone could even eat it.

Any amount of potatoes, carrots, onions and beets are in all the stores. These root veggies aren't affected by the temperature above ground so they're plentiful here. They are sold in the supermarket with all the dirt still attached. I was shocked to see this at first. I've heard it said around here that washing them takes the vitamins away, but I think it's just an excuse to get out of doing that before being sold to stores.

Sometimes grocery shopping can be a real adventure, but I guess a person has to learn quickly since you can't eat without shopping.