Story Behind the Faberge Egg 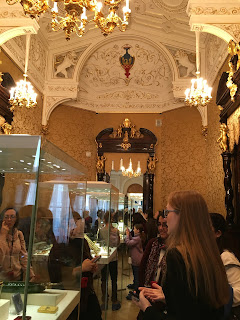 Last month I had a chance to visit the Faberge Museum here in St. Petersburg, located in the restored Shuvalov Palace. The building itself is an amazing work of beauty. The rooms are redecorated to fit the early 18th century style in which it was originally built. 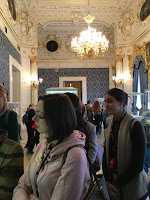 The golden highlights in the exquisite ceilings added to the look of grandeur throughout the museum. I'm always struck with a feeling of overwhelming opulence when I visit these former palaces. So much money was spent on these homes for royalty.


Seeing the building was an experience all by itself, but seeing the collection of Faberge eggs was icing on the cake. The museum owns nine of the original Imperial Faberge Easter eggs. The eggs were made by Peter Karl Faberge from 1885 to 1917. Tsars Alexander III and Nicholas II ordered the eggs to be made as gifts for their wives/mother during those years.


Tsar Alexander III commissioned the first one in 1885 to surprise the Tsarina. Inside the outer white egg was a golden yolk holding a hidden hen decorated with jewels. His wife was so thrilled with this Easter gift that they ordered one to be made every year after that.

There was one requirement for the eggs. They had to be unique each year and had to contain an element of surprise in each one. Sometimes a small animal was hidden inside or other miniature item. Faberge used pearls, gemstones, and diamonds to decorate his many Easter eggs. It took a whole year to design and construct each one.

The surprise in the Rosebud Egg was, of course, the yellow rosebud. An extra surprise of a golden crown with diamonds and rubies was inside the rosebud.


In 1897, after the death of his father, Nicholas II gave Tsarina Alexandra the Coronation Egg as a remembrance of his coronation. The surprise inside was a four-inch replica of the coronation carriage that she rode in for this momentous event.


The Lilies of the Valley egg was decorated with pearls representing the white flowers. The surprise was found when a button was pushed that allowed a device to pop-up holding three miniature pictures of Tsar Nicholas II and his two daughters.

The Cockerel Egg decorated with rubies, diamonds, and pearls had a bird that popped out of the top and sang a song. It was commissioned by Tsar Nicholas II for his mother Empress Maria.

The Fifteenth Anniversary Egg was presented to Tsarina Alexandra to commemorate the fifteenth anniversary of Nicholas II's coronation. It didn't have a surprise because it was covered by miniature pictures of events from the first fifteen years of his reign.

The museum contained displays of other jewelry and items made by the Faberge company during the late 1800s. It was sad to learn that the Faberge family was forced to flee Russia during the 1917 Bolshevik Revolution. In the ensuing chaos, the Faberge family failed to copyright their name. So today any jewelry manufactured under the Faberge name is not part of the original Faberge jeweler family.

If you're ever in St. Petersburg, I'd recommend a visit to this beautiful museum. It's a one-of-a-kind experience.