NOT Just Another Mansion

By connie cortright.com January 22, 2019
At the tail end of the tour of the Rumyantsev Mansion that I described last week, the guide took us to another wing of the museum where we could learn about the era of Soviet control. It showed what the workers had to do, etc, but back in the dark corner of the mansion a communal apartment from the Soviet era was preserved.

If you don't know what a communal flat is, I'm not surprised. I've never heard of them in the US. It was originally an apartment for one person with a sitting room, a couple bedrooms, dining room, kitchen and toilet. However, when the Revolution of 1917 took place, this flat was divided into a communal apartment that held five families. Each room became the apartment for an entire family. 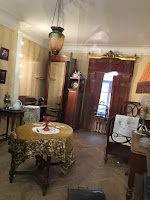 The largest room became the home for the original owner of the apartment. She moved her bed, armoire, dining table, and hutch into her one room. There are people who live in efficiency apartments today that would find this comparable. But if you had a family with five children, that would be a different story, and that could have very well been the case. There was no place to get away for a minute. 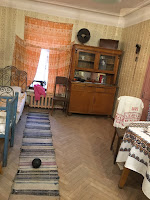 The next room was smaller since it was a former bedroom or dining room. This apartment held fewer items because of the size. A single bed, small table and cabinet for dishes fit into the space, but that was all. I have no idea where clothes were stored. This room also had a baby crib in it. How could a family exist in this tiny space? 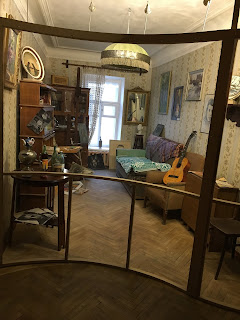 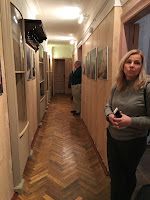 The room sizes shrunk the farther we went down the hallway. In the one pictured on the left, young people must have lived here with the guitar and other artifacts present. I can't imagine living in such close proximity to your neighbors.

The guitar music would go through the walls, waking the baby asleep in the next room. Then the baby's cries would be heard everywhere.

All the different apartments were off of the one main hall. Imagine meeting your neighbor as you walked down this hallway early in the morning with your eyes half shut.

Everyone had their own electrical meter to make sure that you paid for only the electricity that you used, but who paid for the common electricity. Who knows? 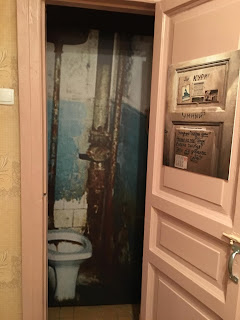 Of course, the hallway led to one of the two common rooms for the entire communal flat - the toilet. From what I've heard first hand, this part of the flat was always a terrible dirty mess. Who would want to clean it up after 15 or so other people used it? My mind stops right there. I can't get past that one. 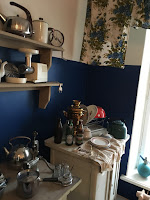 The other common room was the kitchen. The one we saw in the museum had three stoves and a couple sinks. Each family had an area with some counter space over a cabinet that held dishes. How often did things disappear from your cabinet, though? 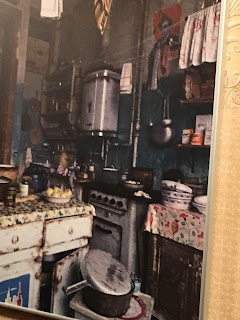 From what we've heard, this kitchen could also be a complete mess since no one wanted to clean up after the last guy's mess. Some flats arranged schedules to clean the common area, but how often did that take place?

We were told that there was no common shower in this flat. A curtain was pulled around the kitchen sink area behind which you could then wash up. Really?

To be fair, our guide said that in many of these communal flats, families: grandparents, cousins, aunts, uncles, etc all lived in the close apartments. That might have been manageable. But I still come to the conclusion, I'm very glad that I've never had to live in a communal flat.

There are still communal apartments in St. Petersburg today. I've heard that you never leave food unattended in the common kitchen. One day someone went back to his room to get the salt shaker for what he was cooking. When he returned to the kitchen, someone was eating the food right out of his pot. One person told us that when he uses the common shower, he often feels dirtier after his shower than before. No, thank you!

But remember EVERYONE in the Soviet era lived in these conditions! They didn't have a choice.

No, I don't think I'll ever forget "just another mansion" that we toured on that day!