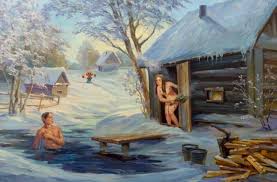 Well, this last week I survived a real Russian experience - a trip to a banya. Russians, like the Scandinavian countries, are known for their steam baths before jumping into icy waters. The thing that Russians add to the experience is the "venik" which is a bunch of birch twigs tied together, also referred to as a "broom."

Our International Women's Club of St. Petersburg decided that we wanted to have this Russian experience in real life, so we visited a banya in the city.

None of us had ever been to one before, so this was all new to us. We learned ahead of time that we were supposed to bring towels and a sheet. Most of us had to purchase a felt hat and the venik. The branches were supposed to improve circulation as you struck your back, legs, etc with the "broom." I learned that the felt hat was required so that the extreme heat wouldn't affect your head or ears. We voted on using the common room  - where everyone was naked together - so that we'd experience the real deal.

The dressing area reminded me of the typical locker room in high school. I haven't been in one of those for ages, but it looked pretty much the same. We each had a locker - sort of - to store our clothes. It didn't really lock anything up from anyone else, of course.

After we had divested ourselves of our clothes and were wrapped in sheets or a towel, we entered the large common room, a rectangular gray room with many faucets, showers, and a large drain in the middle of the floor. In one corner was the cold dip tank, but I only saw one person ever climb up into it.

This was where we met our first babushkas who obviously were very experienced in the banya culture. We witnessed several scrubbing - and I mean really scrubbing - each other's backs, shampooing hair, taking showers. It was a bit overwhelming at first. 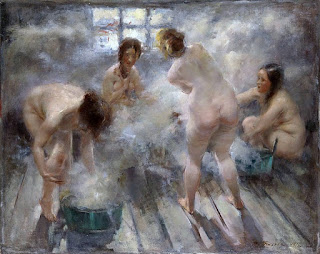 The Russian speakers in our group quickly found out that the venik had to be soaked in hot water to be of any use to us. Large dishpans were filled with hot water and the birch branches were set to soaking. After that time, we were ready to start the real experience...

We entered the HOT tile-floored steam room with a wooden tiered sitting area on one end. As I sat on the lowest level, I saw a woman go toward the back and throw water onto the heat source. We could hear the hissing sound as the water hit the hot rocks, the heat and humidity level rising instantly in the room.

One area of the room was a loft with several steps. That was the area designated for the women to use their venik. Since the birch branches were dried leaves until they were soaked in the hot water, the leaves easily broke apart when the branches were used for stimulation by hitting parts of the skin. As a result, there were pieces of leaves scattered throughout the loft area and even into the common room. Women were walking around with pieces of leaves sticking to their arms, legs, and backs. I'd hate to clean the common room in the evening when everyone was finished with their steam bath.

After the steamy experience, the cold part followed. Of course, there wasn't snow to jump into, so we had the choice of the cold dip tank - which no one used, dumping a dishpan of cold water over your head - which I saw several women do, or step into a cold shower - which I gingerly did. I guess I'm just not into that too much.

Historically, Russian banyas were a necessity in the cities of the USSR. During the time of communal apartments, this was the only way to take a bath. The apartments didn't have any way for the 30 - 40 residents per flat to bathe - no showers or even tubs. That meant that every person in the city had to go to the banya every week just to get clean. Since there are still communal flats in the city today, the banya is the only option that these people have to bathe. Maybe that's why it is hard to be surrounded by Russian men on the metro some days. They don't take a trip to the banya often enough.

For me - give me my shower in my own apartment any day. My one experience at the banya was enough to last me a lifetime.