Last week I told you about our adventure around Peter and Paul Fortress, so this week I'll explain what is inside of the fortress. As I said, it was the first development of St. Petersburg by Peter the Great in the early 1700s. He built the fort to protect the fledgling city from any invaders. The fortress is built in the star formation with bastions on the corners.


Built on the north bank of the Neva River, the structure served as a base for the army in defense of the city. Later in the 1700s, it was used as a prison for political dissenters. 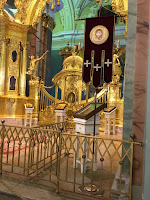 The main structure in the center of the fort is the St. Peter and Paul Cathedral, built from 1712-1733.  This massive church on the fortress island houses the burial location of the Romanov dynasty. The spire, stretching 402 feet to the bell tower, is the tallest structure in the city center of St. Petersburg. 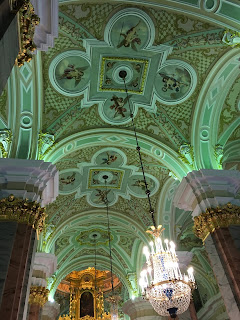 The magnificent Eastern Orthodox church is lined with gold especially by the altar. It is mind-boggling when you see the beauty of such structures to think of the cost to construct these places- in terms of money and also labor of the workers. The arched ceiling was even painted in beautiful detail. 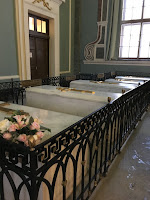 The inside of the building is lined with the tombs of tzars of Russia from Peter I to Nicholas II. The tombs are lined side by side in the back of the church. 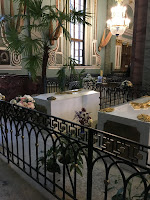 Some of the tombs are decorated with plants around them. I think they were the tzars who lived later in the 1800s.

Peter the Great's tomb was in front of the cathedral at the base of a small golden altar. His son and Catherine the Great were next to him.

The last emperor, Nicholas II and his family were murdered by the Bolsheviks after the Revolution of 1917. At the time, their bodies were buried in Siberia where they were murdered. In July, 1998 their remains were recovered and brought back to the cathedral to be buried in a special room off of the main church called "St. Catherine's Chapel." All of his children are also in this location.


We were happy to hear that during the Soviet era, the tombs were not moved or demolished. The cathedral is once again restored to its original beauty.