Ice Wonders of the World 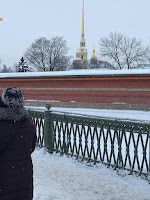 Since we live in Russia, I jumped at the chance to attend an ice sculpture festival. After all, wouldn't the Russians make the best ice sculptures in the world since they live here in this cold land? The Ice Sculpture Festival was taking place at the Peter and Paul Fortress, which we've been wanting to see for a long time. This fortress, located on Zayachy Island, is the first fortified location built by Peter the Great in his new city. 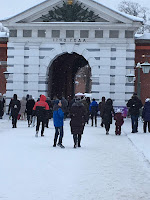 But, we were there to see the the ice sculptures on this cold January day. When we crossed over the bridge onto the island, we first encountered a sign pointing to the left with the words "Ice Fantasy" and an arrow. Of course, the rest of the words were in Russian which we couldn't read. So we started walking toward the left - outside the fortress walls. There were many other people walking along the fortress wall so we were convinced that this was where we had to go. 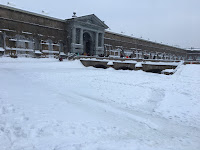 After turning one corner, we saw that the line of people continued on around the next corner, far down the wall. We couldn't figure out where we were going to see these ice sculptures. But they must be good if they're Russian. We kept walking and walking and walking around this huge fortress. My feet were starting to get cold on the snowy walk. Where were we going?

I think we walked almost all the way around this fortress island in our search for the sculptures. But so many people were going the same place we were. 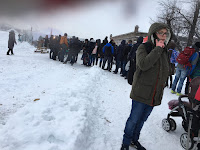 FINALLY, we arrived at a line of people - a long line of people. I stood in line and sent my husband to see if we were in line for the ice sculpture event. He went exploring to see what was up. Of course, he couldn't ask anyone since he doesn't speak Russian. (We found out later that this line was waiting to jump into the icy Neva River for the traditional Russian Orthodox ceremony in honor of Jesus' baptism - 8 days after the Orthodox Christmas Day.) We're glad we didn't wait in line any longer.

We decided that we should have gone into the fort to find the Ice Sculpture Festival. We had to walk back around the wall to the entrance and finally found the right location. Here are the pictures of the carved ice. It was amazing.


We decided that it was well worth it, even if we had such a long walk to find the sculptures. Russia does have talented ice sculptors.

At least, we had our exercise for the day.