By connie cortright.com April 09, 2019
When Russians talk about their most famous poet, they all refer to Alexander Pushkin. Everyone learns about Pushkin during their school days. My husband, who teaches theology to seminary students, has had Pushkin cited during their discussion. When I was on a Pushkin tour of St. Petersburg in February, the group of Russian students, also on the tour, stood before his statue and recited one of his poems.

Born in Moscow, Alexander Pushkin lived at the turn of the 19th century. Early on, his talent as a poet was recognized by the literary establishment. In his late teens, he associated with the intellectual youth culture of St. Petersburg where he graduated from school. These friends influenced his writings to be controversial in subject and style, according to the government.

As a result, he was exiled in 1820 from St. Petersburg. He spent the next several years in Odessa, Ukraine where he continued to work. Written in 1825, his most famous poem "Boris Godunov" was composed
while he was living in Ukraine.


In 1825, Tsar Nicholas I summoned him back to Russia. The emperor appointed Pushkin to his Titular Counsel to keep an eye on his writings. Nicholas was well aware of Pushkin's reputation. 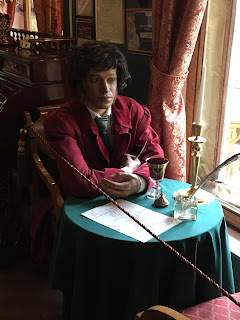 However, the people of St. Petersburg held Pushkin in high esteem. He was very popular among the residents of the city, much to the chagrin of the government.


He would often work on his writing while sitting in a literary cafe in the city- as is portrayed in the scene on the left. Here he met with Gogol (another famous Russian author) many times throughout his years in St. Petersburg.


After Pushkin was married and had a family he found himself in debt more and more because his writing had decreased. In January, 1837, he challenged Georges d'Anthès to a duel because the Frenchman was pursuing Pushkin's wife. Some people believe that this was almost a suicide because d'Anthès was a soldier and much more experienced with firearms. 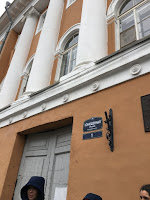 Pushkin was wounded in the duel and died two days later on January 29th. His wife decided to have the funeral at St. Isaacs Cathedral because it is the largest church in the city. However, because of the crowds who wanted to attend the funeral, the government forced the family to secretly relocate the funeral to the Konyushennaya church, located next to the national stables. His body was moved out of the city to be buried next to his mother.

So far, I haven't read anything that Pushkin wrote, but I'm sure that I will before I leave Russia.